Yoga practice as a lab in neuroscience education

by John Weeks, Publisher/Editor of The Integrator Blog News and ReportsLaura Schmalzl, PhD, RYT-500 has been  an associate professor at Southern California University of Health Sciences (SCUHS) for the past year. There, she teaches neuroscience to chiropractic, acupuncture, and Oriental medicine students. A trained yoga teacher with a PhD in cognitive science, followed by a post-doctorate in cognitive neuroscience from Sweden’s renowned Karolinska Institute, and further post-doctoral work at the Department of Family Medicine and Public Health at University of California San Diego, Schmalzl chose to introduce yoga practice as part of the weekly laboratory requirement assignment for her neuroscience students.The external origins of Schmalzl’s unusual lab concept are drawn from the endemic of stress and burnout in health and medical education, a phenomenon that recently provoked further research by the National Academy of Medicine. Schmalzl’s challenge was to keep her over-scheduled students engaged for six hours of neuroscience each week, with four hours of lecture and two hours of lab work. She was also looking at students that were drawn and tired from the demands of their workload. 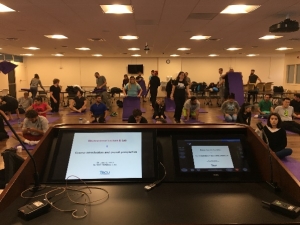 In a typical lab, the students spend most of their time in the classroom. “Any activity that helps the students integrate or deepen the neuroscience lecture material [is the main purpose of the lab],” she says. “It wasn’t just for their sanity, but also my own that I decided to incorporate yoga into the program.”Schmalzl chose to structure the lab by having students first convert the classroom and practice yoga for one hour. Those not willing to practice any given week do not have to but must be in the room—SCUHS has a required attendance policy—and sit or lie quietly with no electronic devices. Following the experiential practice, the whole group then “delves into the theory of it” in the second hour.Three angles of accessSchmalzl speaks about how yoga offers three main angles of access into the neuroscience course content: movement, breath, and attention. The movement component can be discussed with reference to the neuroscience of motor control and body awareness, and to various functional systems including basal ganglia and cerebellar circuits. For example, she instructs the chiropractic students to give their body positioning in yoga the same focus as they would the positioning of their bodies prior to an adjustment.The breath component opens learning about how regulating one’s breathing affects the regulation of one’s nervous system, the function of the vagus nerve, and theoretical frameworks such as the polyvagal theory.  The attention component provides a platform for teaching the students about neural networks underlying attentional control, as well as functional and structural brain changes that have been shown to be associated with meditation and mindfulness practices. 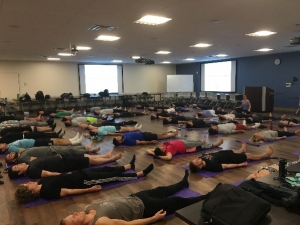 Schmalzl doesn’t always wait until the second hour for the neuroscience instruction, though. “The beauty of it is that I can get them to relate to some of the information experientially, by filtering in bits and pieces of theory during the actual practice.”The neuroscience lab does not end in the yoga classroom. By the end of the term, each student is required to research and complete a written project coupled with an oral presentation. The topic does not have to be related to yoga. “My only rule for topic selection, in addition to its relation to to neuroscience, is that it has to be a passion project—something they really care about,” says Schmalzl. For example, one student decided to explore lucid dreaming.Schmalzl reports that many of the students have come to view the yoga lab, amidst their busy week, as a great break. “I’d say about 85 percent of them are really into it," she says. "Some of them have taken to it like a sponge.”She speaks of seeing “sparkle” come back into some students’ eyes. The yoga feels a fit, she says. “Many students seem to appreciate the work hard, play hard aspect of it.”I asked Schmalzl if she had or was planning any study of the outcomes of her academic intervention. For this first round, she said things were moving too fast  to get approval for such a study. However, she appreciates the uniqueness of the situation. “It’s a rare opportunity to have students going through a mandatory program for 15 weeks.”Possible topics of investigation include the relationship between perceived stress and academic performance, she says.  “I keep hearing from most of the faculty that it’s hard to keeps students motivated," she says. "I think the best idea I have had a as neuroscience instructor was to buy a bunch of purple yoga mats. How could a chiropractic degree not have a portion on training body awareness?”Comment: Throughout this writing, I have projected that typical neuroscience teachers would scoff and use the class as ammunition in the culture wars between medical doctors and chiropractors.  Then, I think of how top educators are suggesting we need to “break the box of the curriculum.” Others, as noted above, are honing in on how present educational methods are driving high levels of depression and burnout.  Perhaps it’s time for well-being to take precedence over fact-stuffing. And who knows—an interesting study could be of how and whether long-term retention rates for material, and pleasure in neuroscience, are associated with yoga lab.
About the Author:

Meditation basics for practitioners and patients