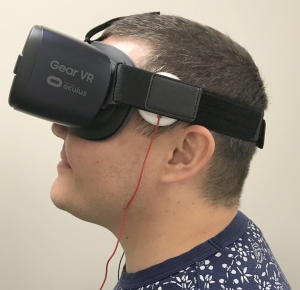 Thousands of individuals experience some sort of anxiety or depression, and many look to the pharmacy for relief. One in five Americans have a mental illness, and one in ten take an anti-depressant, according to the National Alliance on Mental Illness.However, new studies reveal an alternative to prescription medication. Kelly Roman, cofounder of Fisher Wallace Labs, has been testing the combination of neurostimulation and virtual reality with their device, the Fisher Wallace Stimulator.  When worn by a patient, the headband-like stimulator emits a mild electrical current of 15,000 hertz, a fraction of electroconvulsive therapy. The device helps the brain to produce feel-good serotonin while lowering stress-inducing cortisol.Currently, over 20,000 individuals use the at-home device, which is available with a prescription. The recommended use is 20 minutes a day, and most patients use the device while reading a book or watching television, says Roman. But a growing number of people are using the exposure therapy in conjunction with a virtual reality device.The virtual reality devices can transport a patient to calm or positive settings, or walk them through a series of mental visualization exercises. A number of virtual-reality-based treatments exist, such as eye movement desensitization and reprocessing (EMDR), where a patient must recall a traumatic memory, then follow a moving object with their eyes only at the same time. The dual task of memory recall plus eye movement taxes the working memory, causing the traumatic memory to become less clear and vivid. Eventually, after repeating the process, the memory permanently loses its ability to trigger intense emotional responses.Real-life exposure therapy can also be used to treat patients with anxiety. For example, say someone has a fear of flying. The virtual reality stimulator can be used to mimic the sights, sounds and feeling of flying, complete with airplane seats and a subwoofer system. This type of treatment allows the patient to face what causes them stress or anxiety head-on in a controlled environment.The combination of virtual reality and exposure therapy is proven to be more effective than exposure therapy alone in treating anxiety, depression, and post-traumatic stress disorder, according to a study published in the Journal of Neuropsychiatric Disease and Treatment. Initial findings are promising and patients reported high acceptability and satisfaction with the inclusion of virtual reality in their treatment, the group says.Since the 1990s, use of virtual reality in anxiety and depression treatments has been relatively common. The military used virtual reality to deliver prolonged exposure therapy to soldiers and war veterans. A recent study published by the National Center for Biotechnology Information found that virtual reality therapy alone was as good as a combination of drug therapy and virtual reality therapy. One of the drugs studied led to a worse outcome for patients.Military funding has allowed for more extensive research and clinical trials on virtual reality, though many smaller private companies are jumping on the bandwagon and attempting to integrate virtual reality into their own product offerings.Virtual reality has been used for decades as a tool for therapists to administer virtual reality exposure therapy in a safe and controlled manner. Due to cost and access limitations, it has not been widely available. With the advent of affordable mobile virtual reality headsets, there is a new opportunity for mental health professionals to take advantage, says Roman.A notable challenge is the lack of clinical evidence to support if and how virtual reality can be used to administer effective treatment in both clinics and remotely, something the Journal of Neuropsychiatric Disease and Treatment says researchers will need to be aware of. Virtual reality therapy is extremely difficult to find over-the-counter, and the options that do exist can be expensive. Cheaper alternatives are available, however. Many cellphone providers offer affordable at-home virtual reality that can be combined with exposure therapy devices, Roman says, including Zen Zone and Guided Meditation VR.As the mental health industry continues to explore the virtual reality space, there will likely be a number of options for individuals to take advantage of, says Roman, regardless of where they fall on the anxiety and depression spectrums.
About the Author: