Is the U.S. National Academy of Medicine embracing integrative medical views on allergies? 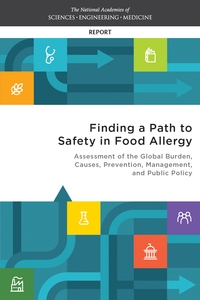 by John Weeks, Publisher/Editor of The Integrator Blog News and ReportsThe trajectory of the integration of care involves the combination of ideas and concepts in the dominant school with this in integrative medicine and health. So, when the National Academy of Medicine—a formerly the Institute of Medicine—published a new report on food allergies, I wondered how well it was aligned with integrative and naturopathic medical practice. To what extent do we see convergence between ideas and practices recommended by guiding light for conventional practice and those typical among integrative health teachers and clinicians. I asked environmental medicine and allergy specialist Walter Crinnion, ND if I might interview him on his perspectives.The report, “Finding a Path to Safety in Food Allergy:  Assessment of the Global Burden, Causes, Prevention, Management, and Public Policy,” runs 576 pages. Crinnion agreed to read the 17-page summary then join me for an interview.“Initially, I went into this with expectation to say ‘wow, those guys did an excellent job. After reading the summary, I don’t know if I have the right adjective. ‘Incredulous’ is the right one for my experience.”

Crinnion’s disagreement started with the statement on the size of the problem. The first sentence of a National Academy of Medicine media release on the report alludes to a general perception that allergy is on the rise and notes that no quality research has actually determined the magnitude. It concludes that studies are likely to overstate the problem.“I was floored by this,” said Crinnion. He cites a World Health Organization publication on allergy from 2011 that concluded that for the last 50 years, rates of allergies have been climbing worldwide to a point that 50 percent have “sensitization” to one or more allergies. The report’s opening “doesn’t fit at all with the WHO” nor with trends in Crinnion’s 35-year clinical experience. “Why would they want to diminish the level?" he said. "It undercuts the need for the report and the changes they are recommending. It’s odd.”Crinnion suggest that this huge gap maybe related to the way the way a broad definition of food allergy is subsequently limited by the committee. The first line of the NAM summary describes food allergy as “an adverse health effect arising from a specific immune response that occurs reproducibly on exposure to a given food.” Crinnion liked this. But 3 pages later, the committee quietly states, mid-paragraph, that while food allergy has two key classifications - immunoglobulin E (IgE)-mediated or non-IgE-mediated (or IGG) - the Committee would only focus on the former.

“The non-IgE are associated with a growing set of problems,” notes Crinnion. He quickly ticks off some: headache, arthritis, asthma, neurologic problems, fatigue, low blood sugar, migraine, and seizures. He points to articles that showed that celiac disease doubled from 1974 to 1989, then increased again increased by 2010 to 17 percent of the population. “All celiac disease is related to gluten intolerance and there is no mention of gluten intolerance,” Crinnion offers, somewhat stunned. “The scope of task for the Committee was not limited,” Crinnion points out. Rather, “they defined themselves into corner. They limiting it very narrowly.Crinnion also faults the report for failing to take a whole system view of what may be involved with the such increases in IgE-related allergy as the report concludes do, in fact, exist. “As a naturopathic doctor, you want to look at the cause. They do not deal with causation at all.” He offers an example: “The environment is clearly implicated in increase of IGE-mediated food allergies. The clearest is with exhaust. If you expose people to challenging food at the same time as to diesel exhaust, rates dramatically increase.”The report’s recommendations on prevention is another area that Crinnion found wanting. “There appears to be no prevention except labeling and calls for regularly educating all public health agencies on new treatments. He notes that the authors also recommend “that everyone is holstered with an EpiPen and that we’ve got one at every ball-field, restaurant, school and theater—even though there is,” he said, “purportedly no evidence that allergy is on the increase.”He said he wondered why, instead of these secondary preventive moves, “there appears to be nothing about identifying those at need and educating the people themselves.”I asked Crinnion for examples of what he considered positive signs in the report. He gave a salute to using NHANES as a method for sizing the problem then concluded: “the rest I thought, from my aspect as a clinician, was so just so many contradictions. They start with broad definition, then its only IGE. They basically dismiss IGG. There is no real examination of cause and no real look at prevention. I was greatly disappointed and glad that I didn’t have to wade through 576 pages to do this interview.”The report was supported by the U.S. government with additional investment from the Asthma and Allergy Foundation of America, Egg Nutrition Center, Food Allergy Research & Education, International Life Sciences Institute North America, International Tree Nut Council Nutrition Research & Education Foundation, National Dairy Council, National Peanut Board, and the Seafood Industry Research Fund.Comment: The decision of the committee to only focus on IgE-mediated food allergy brought to mind an decision of a public agency some years ago when I was involved with a citizen action group on toxic issues. A small community that bordered a military base near Tacoma, Washington was witnessing a surprising level of cancers in community members and their animals.  The asked for the county to do an analysis of water in the well from which the community drew. The response: no problem. The community disbelieved. They brought in outside experts. These informed the residents that the county had only tested the well water for organic contaminants. They didn’t look for inorganic agents, which were later found to be highly elevated—and could potentially be linked to a chemical washing routinely applied to military planes nearby.What a choice, with this National Academy of Medicine report, to take that broad Statement of Task and choose to not examine the area of greatest citizen concern. Worse yet was to then issue the broad, confusing statement that opening the NAM media release on the report that food allergies are on the rise. Why, to use Crinnion’s phrase, did they choose to “define themselves into a corner” that does not address what most affects the public the report is meant to serve?
About the Author:

Researchers call for tougher standards for studies on obesity policies