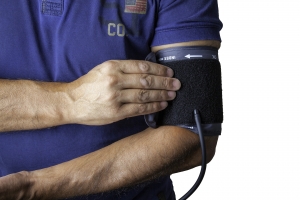 Approximately 7.5 million people in the United States have psoriasis, and the disease affects go far beyond the skin. According to a 2016 World Health Organization report, “Global Report on Psoriasis,” this condition affects at least 100 million individuals worldwide.Psoriasis is a chronic inflammatory disease characterized in most patients by red, raised patches of skin, or plaques, covered with silvery-white scales, according to the National Psoriasis Foundation. It develops when a person’s immune system sends faulty signals that tell skin cells to grow too quickly—new skin cells form in days rather than weeks. The body does not shed the excess skin cells. The skin cells pile up on the surface of the skin, causing patches of psoriasis to appear. The condition is not contagious and, to get psoriasis, a person must inherit the genes that cause it.Like most chronic illnesses, psoriasis may be associated with other health conditions, such as psoriatic arthritis, Type 2 diabetes, and cardiovascular disease. Even patients with mild forms of psoriasis need to pay attention to how psoriasis-related inflammation can affect their overall health, says Jashin J. Wu, MD, FAAD, director of dermatology research at the Kaiser Permanente Los Angeles Medical Center, in a statement published by the American Academy of Dermatology.Treatment options for moderate to severe psoriasis include phototherapy; systemic medications including acitretin, cyclosporine, and methotrexate; and biologics, which block the immune system responses that fuel inflammation. Psoriasis can be managed with a number of therapeutic treatments, Wu says, many of which has some beneficial side effects. In fact, treating psoriasis may help improve cardiovascular symptoms by reducing skin inflammation, which, in turn, leads to less inflammation elsewhere in the body, says Wu.Recent studies indicate that biologic medications may improve cardiovascular symptoms in some psoriasis patients, Dr. Wu says. Some biologic drugs may reduce heart attack risk in people with psoriasis by almost 75 percent, according to one study conducted by Kaiser Permanente in California. The group found that treatment with a certain kind of biologic called tumor necrosis factor (TNF) inhibitors can significantly reduce the risk of heart attacks in psoriatic disease patients, especially in people with psoriasis alone.According to the study results, TNF inhibitors were associated with a nearly 75 percent reduction in heart attack risk, compared with the use of topical therapy, oral medications, or phototherapy. People with psoriatic arthritis, or psoriasis and psoriatic arthritis combined, also had a reduced risk, but the effect was much smaller, with a 14 percent reduction in heart attack risk in people with psoriatic arthritis, and a 24 percent reduction for people with both forms of the disease.But the exact reason for this improvement remains unclear. Wu says more research is required to determine whether a direct connection exists between biologic treatment and the improvement of cardiovascular symptoms, and to evaluate how biologics compare to other psoriasis treatments in reducing cardiovascular diseases. In the meantime, Wu advises all psoriasis patients to seek treatment, maintain a healthy weight, and talk to their doctor about screening for cardiovascular conditions.“Psoriasis is a serious medical condition that can have a detrimental effect on your overall health,” Dr. Wu says. “If you have this disease, talk to a board-certified dermatologist to determine the best treatment option for you. Managing your psoriasis is not just about improving your skin — it’s about caring for your entire well-being.”
About the Author: