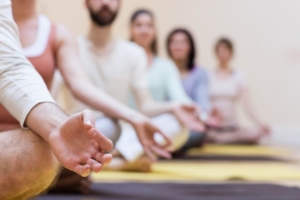 A new study published in Military Medicine shows that veterans with post-traumatic stress disorder (PTSD) found significant relief from their symptoms when they practiced Transcendental Meditation (TM), a form of silent mantra meditation.Researchers, overseen by lead author Robert Herron, looked at 41 veterans and five active-duty soldiers in the study who had been diagnosed with clinical levels of of PTSD, as measured by the PTSD Checklist-Civilian (PCL-5).Participants practiced TM 20 minutes a day, twice a day. This approach to meditation, which was first introduced in the 1950s, has been researched extensively over the past 50 years, garnering over 400 peer-reviewed studies. The technique requires the person to say a mantra while sitting with the eyes closed, and is a relatively simple practice compared to those requiring extensive contemplation and concentration.After one month of practicing the TM technique, 87 percent had a significant decrease of more than 10 points, based on the PCL-5 scale. In addition, 80 percent of participants had their symptoms reduced to below clinical level, meaning they were no longer considered to have a disorder. In a 90-day post-test, PTSD symptoms continued to improve, according to the study.The effect side, a measure of the magnitude of treatment, was 1.91, with a value of 0.8 considered to be a strong effect. The results had a p-value of p < 0.0001.Standard treatment included counseling and re-experiencing trauma as part of the therapy, which results in two-thirds still suffering from PTSD after being treated, according to an August 2015 military psychotherapy study.TM is easy to do and results come quickly, according to James Grant, director of programs for TM for Veterans, which provided partial funding for the study. "TM promotes self sufficiency—it's a tool that the veteran can use for life, on his or her own," says Grant.In the past, research has shown that  TM has a positive benefit for conditions associated with PTSD, such as anxiety, insomnia, depression, and high blood pressure. Since TM works on the neurophysiological level to reduce stress, it has broader impact than cognitively-based therapies, Grant says.The current study follows four previous studies on veterans that suggested a benefit for PTSD. Because of these promising findings, the U.S. Department of Defense has supported a randomized controlled trial involving 210 veterans that is now nearing completion.Click here for more information.
About the Author: