Timing is everything part 1: The complexity and clinical consequences of circadian dyssynchrony

by Lena D. Edwards, MD, ABOIM, ABAARM, FAARM, FICTThe daily rotational cycles of the earth result in 24-hour cycles of alternating light and darkness.  This rhythm affects the sustainability of life on this planet because it dictates global food availability, temperature, and light intensity.  Human beings have evolutionarily adapted to this predictable cycle by creating internal clock systems, which synchronize all metabolic, cellular, and behavioral processes.Extensive research has shown that the functional integrity of the human circadian clock system is a critical determinant of health, behavior, and disease development.  In fact, even when other confounding comorbid factors are absent, circadian dyssynchrony can increase an individual’s risk of developing a number of diseases including diabetes, hypertension, a variety of malignancies, and cardiovascular disease, to name a few.  Healthcare providers can better counsel and treat their patients when they understand the pathophysiological mechanisms by which ‘being out of rhythm’ can cause widespread physiologic disarray.The central mediator of the circadian hierarchical clock system is the ‘master clock’ located in the suprachiasmatic nucleus (SCN) of the ventral hypothalamus. Remarkably, the 20,000 neurons located here are cell autonomous, individually capable of generating their own rhythmic oscillations. However, for optimal central clock function to occur, the SCN relies on a collaborative network comprised of a community of all individual, cell autonomous neurons.  The innate function of the human circadian clock system is a genetically influenced; however its functional integrity is mediated by an intricate interplay of exogenous cues, endogenous hormonal mediators, and numerous molecular factors.  Many types of exogenous cues, including light exposure (most “potent”), feeding times, physical activity, and sleep habits, can regulate SCN control of circadian rhythm. 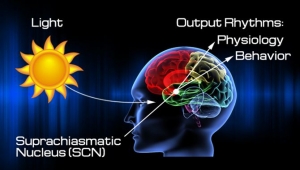 There are three essential components of the human circadian clock system.Yes, you read correctly: individual organs, including the liver, intestines, adrenal glands, pancreas, heart, and brain, possess their own tissue-specific peripheral clock systems. 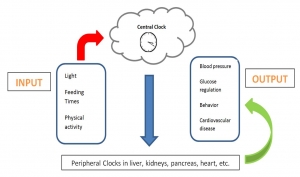