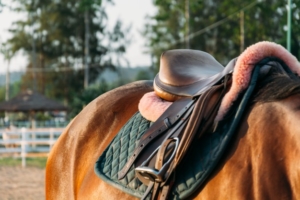 Veterans had a significant decrease in post-traumatic stress disorder (PTSD) scores after participating in therapeutic horseback riding (THR), according to a study published in Military Medical Research by researchers at the University of Missouri.In the United States, military veterans diagnosed with PTSD often are prescribed THR as a complementary therapy, but little is known about how these programs affect PTSD in military veterans. Results show that therapeutic horseback riding may be a clinically effective intervention for alleviating PTSD symptoms in military veterans.For the study, which was supported by the Harry S Truman Memorial Veterans Hospital, 29 military veterans were assessed for eligibility from a nearby Veterans Administration (VA) hospital. Those diagnosed with PTSD or PTSD with traumatic brain injury were invited to participate in a therapeutic horseback riding program once a week for six weeks.PTSD symptoms then were measured both at three weeks and six weeks into the program using the PTSD Checklist-Military Version (PCL-M) assessment, a 20-item self-reporting survey that is used by clinicians to gauge PTSD symptoms. Additionally, other measurement instruments were used to assess improvements made in the treatment of the anxiety disorders.Results showed that participants in the program experienced a near 67 percent decrease in scores after three weeks of THR, according to Rebecca Johnson, a professor in the MU College of Veterinary Medicine and the Millsap Professor of Gerontological Nursing in the Sinclair School of Nursing. After six weeks, participants experienced an 87 percent drop in PTSD scores.The veterans who self-identified for the study all were from the Vietnam War era meaning that some of these military veterans had been experiencing PTSD symptoms for 40 or 50 years.PTSD is an anxiety disorder that occurs after exposure to life-threatening events or injuries and is marked by flashbacks, avoidance, and changes in beliefs and feelings. Estimates are that more than 23 million military veterans experience PTSD symptoms each year, says Johnson.The interaction between horses and riders has been demonstrated to increase riders' confidence, self-esteem, sensory sensitivity and social motivation while decreasing stress."While counseling and behavior therapies often are prescribed, sometimes clinicians will encourage complementary therapies, such as therapeutic horseback riding," Johnson says. "We wanted to test whether THR could be a useful complementary therapy in the treatment of PTSD."
About the Author: