Spanning 10 years of integrative medicine coverage, the Integrator Blog, which I began publishing in 2006, officially turned 10 on March 27, 2016. The first issue carried news of the Bill Moyer’s special on The New Medicine, funded by the Bravewell Collaborative of philanthropists for medicine. The subsequent decade of Integrator content has produced 8.5-million page views on 850 distinct posts and nearly 2,700 separate news items. Many of these were in Integrator Round-ups that were co-posted with IntegrativePractitioner.com over the last 7 years.

So what does reader interest say about the decade of history? I recently completed an analysis of top stories via page view statistics. Below is a weighted Top 12 of stories based on reader interest and response relative to the time since posting. 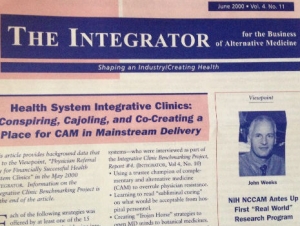 Comment: Looking back at these ten years sent me recollecting back further, to the prior ten. I first began regularly chronicling the field in 1995 with a monthly column, Charting the Mainstream, in the Townsend Letter for Doctors. This was just after David Eisenberg, MD his Harvard team shocked the medical industry with news that a third of adult Americans were using some “unconventional medicine.” In 1996, as the medical industry awakened, St. Anthony’s Publishing invited me to write a $200/year hard-copy newsletter that I subsequently purchased and re-named The Integrator for the Business of Alternative Medicine. Premier subscribers received an electronic chronicle, the Industry Health News Files (1999-2002). When I returned in 2005 from 3 years of a working sabbatical with my spouse and two young children in Costa Rica and Nicaragua, a mentor, Clem Bezold, , suggested I start a blog. Thus the Integrator was born.

My pride in this work is helping make connections that support the field’s emergence. One example is the integrative medicine for the underserved leader Myles Spar, MD, who once recalled the role of the Integrator in his transition from regular medicine: “When I began my self-training in integrative medicine in earnest and looked for a to guide my training and found The Integrator Blog. It showed me that there was a community of like-minded practitioners and helped me find my way.” Other praise came from Boston Medical Center’s Rob Saper, MD, MPH, who said that “the insight and writing in The Integrator Blog document our course while challenging us to move forward.” (Both quotes were cited in this document.) 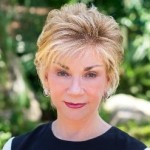 We’ve come a long way! The Integrator’s contributions have been possible through the 8-year partnership with IntegrativePractitioner.com, and through some generous multi-year sponsorships from Lou Sportelli, DC and the NCMIC Group; Richard Sarnat, MD and the AMI Group; and Peter Amato of Inner Harmony Wellness. A wonderfully generous investment from Ruth Westreich (pictured right) for 2015-2016 is also fueling the work. What will the top stories for the next decade be?

Free e-book discusses the rise of integrative health and medicine