From research into practice: Nurse Rauni Prittinen King and Healing Touch in the Veteran’s Administration

by John Weeks, Publisher/Editor of The Integrator Blog News and ReportsEditor’s note: This analysis article is not edited and the authors are solely responsible for the content. The views and opinions expressed in this article are those of the authors and do not necessarily reflect the official policy or position of Integrative Practitioner.In the telling of Rauni King, hundreds of veterans in the Los Angeles VA and elsewhere are presently receiving  Healing Touch from scores of nurses sponsored by their agency to get trained in the method that goes back to two voicemail messages she received back-to-back in 1999.It’s a story of a surprisingly quick translation of a quality research publication from 2012 prompting adoption in practice in the Veterans Administration facilities. Passion also helped.King, a long-time collaborator with integrative cardiologist Mimi Guarneri, MD, had already been practicing healing touch for a decade when she received the calls. Since 1993, she’d offered it at Scripps where she was an ICU nurse.  In the mid 90’s she founded Scripps Center for Integrative Medicine alongside Guarneri.“You know how these coincidences happen,” King began. The first voicemail message was from a retired military officer. He was concerned with reports of suicide in the military from PTSD. Was there anything they had to offer for service men and women with PTSD? The second message was from a nurse at nearby Camp Pendleton, Marine Base. She wondered if Scripps did anything with PTSD. “I believe in energy, you know,” said King: “How would those two leave messages like that at the same time?” 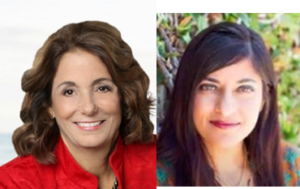 King proposed to Guarneri that they do a Healing Touch study. This biofield therapy was developed during 1988-1990 by Janet Mentgen RN, a former Navy nurse. She created a Healing Touch training program for the American Holistic Nurses Association (AHNA) after receiving an AHNA award for her hands-on healing work. AHNA is currently a continuing education provider for this multi-level training program created for healthcare professionals through the not-for-profit Healing Beyond Borders (Healing Touch International) and Healing Touch Program.After discussing how Scripps could do a study with the active duty marines with PTSD, they took the idea to Camp Pendleton. Since King was one of the PI’s in the study, she could not do the healing therapy. She found a willing partner and a champion in Healing Touch practitioner Elizabeth Fraser, BSN, CHTP.Money was the next issue. The Camp Pendleton Mental Health Clinic was happy to provide subjects for the study and a healing space, but they did not have any funding. King and Guarneri stitched together funding via a major contribution from a philanthropic couple, Don and Ruth Taylor, who have supported other work of the Guarneri-King team (including the start-up of the Academy of Integrative Health and Medicine.)The Samueli Institute also pitched in. They supported the evaluation of the collected data and the writing of the study by Shamini Jain, PhD who was then a research scholar there. Jain presently leads the Consciousness in Healing Initiative, CHI, with which King, Guarneri and I are each involved. (L-R, Guarneri and Jain.)The study population was entirely made up of returning, combat-exposed, active duty marines. The randomized, controlled trial (RCT) was engaged at the Marine Corps Base Camp at Camp Pendleton. They enrolled more than 123 participants during 2008-2010. Results were published in Military Medicine in 2012 as “Healing Touch With Guided Imagery for PTSD in Returning Active Duty Military: A Randomized Controlled Trial.” The team reported clinically significant reductions in PTSD symptoms and depression. They also found significant improvements in mental quality and “reduction in cynicism.”

King believes that carrying out the study on a Marines Corps base and then publishing in the conservative – but practical-minded – Military Medicine helped with her next steps. The modality’s origins were with a former 40-year military nurse, Mentgen, may have added additional positive context for the VA’s acceptance of the modality.The Veterans Administration’s Office of Patient Centered Care and Cultural Transformation - “their way of saying ‘integrative’” says King – contacted her about offering Healing Touch training.  It helped that that VA office was and remains directed by a long-time integrative medicine leader, Tracy Gaudet, MD, well known to King and Guarneri.King has since taught over 30 classes to batches of VA nurses – some two days in length, some 4-days. Her estimate is that over 1400 have since taken training, “maybe more.” The certification has five levels – King teaches all of them. Most participants do not continue to full certification. “It’s an easy to learn technique,” notes King.  Even those who complete an initial training can immediately begin integrating Healing Touch into their clinical practice.King stresses that the positive, relaxation effects of the therapy can be immediate and are meant to be felt in the nurse or other caregiver’s bearing. King explains: “We take an approach that recognizes that we are already working energetically with the patients from the first moment we meet the person. The energy moves through the provider and the client. In the first class we teach how to ‘run energy.’ When you are mindful at bedside you can do a short treatment in 5-10 minutes. Just a hand on a patient for a few moments can make a difference.”King turns to an additional value from healing touch that she says is also well-known: “When you run energy through yourself to the patient, you are actually receiving your own energy treatment at the same time.” The healing is a two-way street. Offering the program is a protection, she says, against nurse/provider burnout.The research stimulated by the two voicemails to King’s office in 1999 and later researched by Jain provided leverage to open the doors of multiple VA’s in southern California, Washington state, New Jersey and elsewhere. Yet in King’s view, it is the malleability of the method that distinguishes Healing Touch from some other energy approaches for use in major institutions: “It’s the most conducive biofield therapy to start in a VA facility or other healthcare system because it comes from a nursing tradition.”
About the Author:

Why I got in to integrative medicine