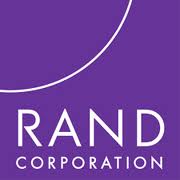 by John Weeks, Publisher/Editor of The Integrator Blog News and ReportsA new study by the RAND Corporation suggests that patients who pass through the doors of military treatment facilities (MTF) have more access to complementary and alternative health services than those entering civilian medical delivery organizations, according to the report published August 10.The 95-page report, entitled Complementary and Alternative Medicine in the Military Health System, found that 83 percent of MTFs offered at least one complementary health service. Roughly half offered between four and eight separate services, with relaxation therapy, acupuncture, progressive muscle relaxation, guided imagery, and chiropractic being the most common.Each month, some 76,000 patient visits at the MTFs included complementary and alternative medicine (CAM) therapies given by 1,750 providers. This reflects an investment of $112.7 million per year in labor required to provide the services, according to the report. Patient visits for CAM made up a “small by nontrivial” portion of total outpatient MTF visits, with common conditions treated including chronic pain, stress, anxiety, back pain, and sleep disturbances, according to physicians surveyed. These figures range above recent analyses of complementary medicine services provided in U.S. civilian hospitals.

The study, led by Patricia Herman, ND, PhD, and her collaborators Melanie Sorbero, MPH, PhD and Ann Sims-Columbia, FACHE, NE BC, was conducted within the Forces and Resources Policy Center of the RAND National Defense Research Institute. The Defense Center of Excellence for Psychological Health and Traumatic Brain Injury requested the research. The study followed the methodology of a 2011 examination of complementary and alternative medicine services provided in Veterans Health Administration facilities.The data represent the interest at high-level outcomes in the military. The Assistant Secretary of Defense for Health Affairs “tasked the Assistant Secretaries of Manpower and Reserve Affairs in each military service to circulate the data call to all the [facilities] under their purview,” according to the report. They identified 142 facilities to survey, and responses were submitted from 94 percent. 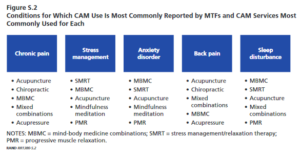 While multiple complementary services were found to be available, in many MTFs, those offered were poorly utilized. Most sites, for instance, reported fewer than 50 patient encounters per month for five of the ten most commonly-offered CAM services, which include acupuncture, stress management and relaxation therapy, progressive muscle relaxation, biofeedback, and acupressure. Chiropractic was utilized more frequently, and lengthy waitlists were most often found for acupuncture and chiropractic services.The branch of the military also proved to be a factor in the availability of CAM services—the highest availability was in the Army, with the lowest in the Air Force. Barriers to accessing CAM therapies often related to availability of complementary health service providers, and a lack of education of conventional providers to the potential value. Evidence is making a big difference, according to the report. Over half of the facilities cited emerging research as their reasons for offering complementary services.The authors offered policy guidance, often toward greater standardization of complementary services. Disparities in credentialing and privileging processes could be evened out, they said. Quality of care and the ability to examine outcomes, for instance, could be hampered due to the variable use of codes. The authors’ recommendations included “targeting future research toward the CAM services with reported success.”Comment: The military has three characteristics that facilitate the uptake of complementary and integrative services. These distinguish it from civilian medicine, and underscore why and how the military has become our nation’s proving ground for integration. The first is a fundamental, value-based bent. The military cares about performance, and it has a bias toward exploration for the same reasons that actors and athletes were early CAM adopters. The second is that military medicine is, effectively, a single payer-type environment. Decision-makers are not energized by the volume orientation in the civilian medical industry that is misaligned with integrative care.  The third is the top-down orientation. A former military official involved with the integration process shared with me informally that when the military decide to head in a direction, it can just decree it. The RAND study appears to be the launch pad for the military’s next advances.
About the Author:

Do patients want integrative treatments, and are they willing to pay for them?