Some years ago, University of California at San Francisco integrative oncologist Donald Abrams, MD began using his cache as a Newsweek- 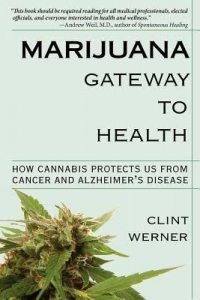 acclaimed “top cancer doctor” to talk up the value of medical marijuana. Powering up his own professional interest was that Abrams’ partner, Clint Werner, had recently authored Marijuana: Gateway to Health, a book that academic integrative medicine leader Andrew Weil, MD acclaimed as “required reading for all medical professionals.” Now, a very few short years later, businesses like the new Holistic Cannabis Network®(HCN), the not-for-profit Society of Cannabis Clinicians, and the journal of Cannabis and Cannabinoid Research are lined up to provide educational opportunities for practitioners at all levels who ar4e interested in these tools.

I was contacted recently by Donna Shields, MS, RDN and Laura Lagano, MS, RDN, CDN, the nutritionist team behind the HCN. The two had drawn 16,000 participants from across the globe to their June 2016 Holistic Cannabis Summit. The Summit’s speakers included functional medicine leaders Jeff Bland, PhD - “a big proponent of ours” – Aviva Romm, MD and Sidney Baker, MD, plus others more closely linked “to the medical marijuana world.”The interest in the Summit convinced the two that there was a place for cannabis education programs that they since developed as the Holistic Cannabis Academy. Completion of cannabis education  courses could lead to becoming a certified “Holistic Medical Cannabis Practitioner” or “Holistic Medical Cannabis Counselor.” In a joint interview, Shields and Lagano shared that their program is intentionally practical, with business skills training, and integrative in orientation, with “cannabis as just one tool of the paradigm.” They include a foci on “how to make [medical cannabis] work in their practice.” They are “positioning it as a business building tool” with downloadable materials and patient handouts.  They report 25 registrants at $2500 each for their first practitioner program. The non-practitioner program is shorter, and with an $1100 price-tag. While all online, the two have “a private Facebook page to engage” those in the courses. They see this original work with the Academy, the Network and the Summit as part of a multiyear business plan with “six pillars” of activity.A

mong the Summit speakers were two educators who have been involved with the Society of Cannabis Clinicians: Debbie Malka, MD, PhD and Ethan Russo, MD, a board certified neurologist and psychopharmacology researcher. This not-for-profit, founded in 2004, calls itself “Physicians and Allied Professionals Employing Medical Cannabis in Patient Care.” According to Michelle Sexton, ND, the Society’s treasurer and a researcher at the Bastyr University Research Institute, the group is “mostly MDs and DOs who came from a core group that has been utilizing cannabis within the context of their primary practice since it was legalized in CA in 1991.”  She notes that “there is quite a bit of free content on the website.” One piece of work is providing CME for doctors and are presently “condensing the program to 4 hours for State approved courses and reaching out to professional medical organizations.”  They invite membership via the Society’s Become a Member page.

Another new player in this arena is the Cannabis and Cannabinoid Research, a publication from Mary Ann Liebert. Liebert is also the publisher of the Journal of Alternative and Complementary Medicine (for which I serve as editor in chief) and Medical Acupuncture, among 80 other publications. The journal bills itself as “the only peer-reviewed open access journal dedicated to the scientific, medical, and psychosocial exploration of clinical cannabis, cannabinoids, and the endocannabinoid system.” As “open access,” articles are available to readers without cost. The editor in chief is Daniele Piomelli, PhD, PharmD, a member of the faculty at UC Irvine. Comment:  In The Poem of Hashish, a pamphlet written by mid-19th Century French poet Charles Baudelaire, the

author applies his scientific mind to his experience with the pharma agent that was making its way into his circle at that time. At one point, Baudelaire offers the observation that one thing that one notices under the influence of hashish is “a distinct lack of will.” This is not a characteristic of the Lagana/Shields team, for whom the interest in medical marijuana has prompted them into overdrive as they respond to the opportunity to educate, certify, organize, and build their brand.In truth, the level of activity as cannabis escaped from the plastic baggie “lid” and into research and practice – especially in legal state such as Washington where I reside -- is indeed remarkable. In these resources noted here, and others, the consumer, practitioner, or researcher has an opportunity to engage multiple resources and communities depending on one’s interests and skills.
About the Author: