by John Weeks, Publisher/Editor of The Integrator Blog News and ReportsEditor’s note: This analysis article is not edited and the authors are solely responsible for the content. The views and opinions expressed in this article are those of the authors and do not necessarily reflect the official policy or position of Integrative Practitioner.For those paying attention, the name of Bernard Osher has for two decades been associated with multiple investments in academic integrative medicine. The first hint of what was to come was in 1998. These were the earliest days of academic integration. He and his spouse, Barbro Osher, established the Osher Center for Integrative Medicine at UC San Francisco. Since then, Osher has established five others through the Bernard Osher Foundation. Now comes news that their joint efforts will be empowered in perpetuity through a $5.5-million endowment of a “Coordinating Center” for the Osher Collaborative for Integrative Medicine.

The network of centers slowly came into view as an emergent constellation, clustered in the United States with an outlier in Norway. The second to open was a flagship center at Harvard, then directed by David Eisenberg, MD and now fascia researcher Helene Langevin, MD. The Karolinska Institute – which brings us the Nobel prizes – added additional luster in 2005, broadening the Osher name’s linkage across the whole Euro-North American band of the “integrative” brand. Martin Ingvar, MD, PhD is the team leader there.Nearly a decade later, Chicago’s Northwestern University became the fourth, known for its strong clinical offering under the direction of Melinda Ring, MD. The same year of 2014 birthed the fifth, at Vanderbilt, with Roy Elam, MD as founding medical director. Finally, this year, a fifth in the United States and sixth globally, at the University of Miami, under the direction of family medicine chair Robert Schwartz, MD. (Photos are of directors in the order of the center’s founding.)

The new grant went to the UCSF Osher Center, where the director, Shelley Adler, PhD, made clear in an interview that she is – since being asked to draft the proposal to the Oshers – “being vigilant that the coordinating center is accessible to all, equally.” The bulk of the funds endow the Center’s stiff, full-time director Nicole Bloom, and assistant Christine Milentis. Adler made it quite clear that the Oshers’ generosity is basically funding internal support: “Any project we want to do will require additional philanthropy.”Adler first noted the already evident value of the Coordinating Center following a recent gathering – that revolves between centers – at Harvard. They are thinking about how to best collaborate and share clinically, in education, and in research. Now when they check in with each other, the positive developments are framed as areas where one center can share strategies with the others while challenges, “rather than whining,” she laughs, “are opportunities to learn from others.” As a group, they Are exploring “what can we do to maximize the value of what we have learned.” And to do this, the Coordinating Center is “the mortar, the glue.” 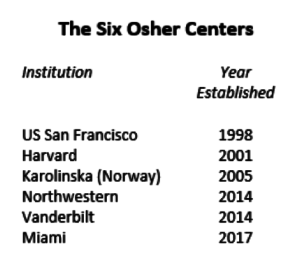 One early development was a collaboration with JACM (Journal of Alternative and Complementary Medicine), a peer reviewed journal for which the present writer serves as editor-in-chair, that is dedicated to exploring “Paradigm, Practice and Policy Advancing Integrative Health.” In 2018, the Osher Collaborative will become a column partner of JACM with quarterly contributions relative to the issues in the expanding field.The Osher media release noted that the Coordinating Center will “facilitate collaborative initiatives among the Osher Centers for Integrative Medicine around the world” that “amplifies the six Osher Centers’ collective impact on health and well-being internationally. Another role will be in “magnifying” successes and maximizing the dissemination of the Centers’ research, educational, and clinical activities. For a sense of the immense integrative reach of the Osher Collaborative’s partners, visit the interactive Osher Collaborative Network Map. Said Adler, about the joint benefactor of the Centers: “Bernard Osher has long been a visionary in the field of integrative medicine.” 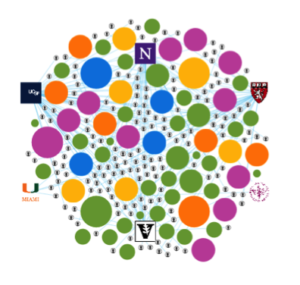 Comment: Adler’s excitement for the collaborative potential with the opportunity provided by the Osher endowment reminded me of the excitement I heard from Tracy Gaudet, MD in 1999. The Veterans Affairs leader in patient centered care and cultural transformation was then the director of what is now the University of Arizona Center for Integrative Medicine. The now 70-institution plus Academic Consortium for Integrative Medicine and Health, was at that time - in the phrase favored by my down-to-earth father - “nothing yet but a gleam in their eyes.” One interesting evolution ahead for the Osher Collaborative will its optimal relationship with that larger organization.The bigger question for the rest of us is the what’s in it for me? How will, as the release declares, this development be its own pebble in the pond to send out waves that support integrative medicine, as a field, internationally? In what ways will creating this “magnifying and maximizing” mortar and glue power up their “collective impact on health and well-being internationally”?

The interview with Adler reminded me of a road thus far not taken by Bernard Osher, amidst all his generosity. He has not chosen to endow this academic constellation with the power of integrative inter-professionalism. When I directed the Academic Collaborative for Integrative Health from 2007-2015, with its distributive leadership among academics in acupuncture and Oriental medicine, naturopathic medicine, chiropractic, massage, nutrition, midwifery, yoga and more, I nurtured a fancy. I even drafted a never-delivered proposal. What if the Academic Collaborative for Integrative Health – with its long history of working with colleagues in conventional academic medicine – became what would now be the 7th Osher Center. The Osher Collaborative would get this core set of experienced voices and contributors, dedicated to collaboration, with one investment.What is the new era for “health and wellbeing” that the Osher Collaborative’s Coordinating Center will help foster if not one of respect for teams, for multiple voices, for the basic horizontal commitment in the “about, from, and with” that defines respectful interprofessionalism?
About the Author: