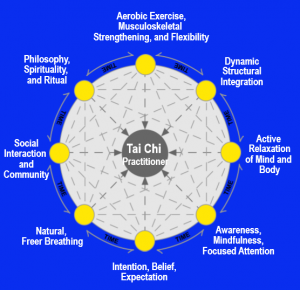 by John Weeks, Publisher/Editor of The Integrator Blog News and ReportsAnyone who has ever cursed a randomized controlled trial (RCT) as ill-suited to capture the outcomes of complex, multimodal, integrative medicine and healthcare would likely be intrigued by a recent talk on a Tai chi research project at Harvard University.The talk focused on Tai chi delivered in community facilities. Yet, any practitioner with a whole person practice—whether integrative medical, naturopathic, holistic, acupuncture and Oriental medicine, Ayurvedic, or other—might project themselves comfortably into this research model.And here’s what may be a hopeful surprise: the research method can be both randomized, and controlled. The devil itself is an RCT.The so-called “pragmatic trial” may be uniquely valuable for providing the kind of “effectiveness” outcomes major decision-makers like insurers and employers and government agencies seek. The assumption is that if a stakeholder is investing in making Tai chi services—or the type you and your profession provide - available to a large population, the best information would not be from an examination of an individual modality. The best would approximate what you and your like-branded colleagues do.The trial form is not new—and in fact is standard fare for the Patient Centered Outcomes Research Institute (PCORI) established through the Affordable Care Act. Sitting through this presentation made me think others might find a couple key characteristics of interest in potentially reshaping ideas of an RCT.Put yourself at the center of the circle

The lead investigator and presenter was Peter Wayne, PhD, the research director at the Osher Center at Harvard University and Brigham and Women’s Hospital. He offered the chart, above, demonstrating multi-factorial components identified as contributing to the effect of a Tai chi practitioner’s work.Put yourself in the center of that circle. It is no wonder that integrative practitioners recoil from research that seeks to strip away most of their impact to perfectly carve out an “efficacy” trial on a single element. Antagonism to the RCT has grown from the way complex approaches can be judged based on such reductive, single agent, pharma-friendly trials.Interestingly, the complexity of the individual practitioner’s multiple modalities captures only a first level of real world ambiguity these types of trials appreciate. As Wayne shared, practitioners of Tai chi come from multiple schools. They have different teachers. Each develops a unique practice style, focusing on different parts of the wheel. These may change over time. Again, this holds true for other integrative health and medicine fields.Outcomes are meant for insurers and other decision makersThe intention is also practical. If an employer wants to cover Tai chi services that are easily available in the employee’s neighborhood—supporting the employee using them—the employer can’t be too fussy about the school from which a practitioner hails, or the extent to which, for instance, breathing techniques are a focus of the teaching. The question is what happens across the population given the intervention, in the context of this diversity? How effective, overall, is the care? The findings are more generalizable to the real world. In research lingo, the study has more external validity. 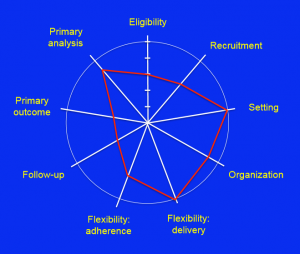 This pursuit causes the intriguing table-turning on research priorities. Instead of the research team doing everything they can, for instance, to rule out the impact of seven of the eight factors in the chart above to determine the effect of one of them, the pragmatic researcher seeks to do the opposite. They apply a tool called the called PRagmatic Explanatory Continuum Indicator Summary (PRECIS) that, now updated, is known as PRECIS-2.A part of the researcher’s report includes estimating the extent to which the research design approximated the real world. In the diagram, this is represented as the circle’s circumference. The researcher estimates this success on nine indicators. For instance:Details of the Tai chi trial and outcomesWayne’s pilot nine-month trail examined the impact of Tai chi on multiple fracture-related risk factors in women 45-70 years old. A local health maintenance organization (HMO) gave them names of potential participants. The red line in the chart draws what Wayne called the distinguishing PRECIS “snowflake” of this trial. “No two snowflakes,” he added, “are alike.” Because the HMO excluded some people, the “Eligibility” tip of the snowflake was lowered. However, because the researchers “did not tell the instructors what to do at all,” the “Flexibility: delivery” is 100 percent and touching the circumference.The study had its problems—particularly in high drop-out rate. They found that those who attended at least 75 percent of the sessions, 70 percent gain had gains in bone density versus an average of average 1 percent loss in the usual care group. Some additional findings suggested the possible real world, long term value of the intervention. Of the active group, 74 percent said they planned to continue the practice and 20 percent enrolled in schools.“If we are interested in life-long learning," said Wayne, "this [kind of trial] will enhance our understanding more than hospital-based studies” in which all subjects are required to come to a more controlled hospital environment.The pragmatic method has it short comings. Wayne notes that these studies cannot be included in systematic reviews. “The randomized controlled trial is a remarkably flexible research tool with a rich palate of pragmatic features from which to mix and match a study design," Wayne closed, speaking to the potential.Comment: This column is not breaking news. Pragmatic trials have been increasingly visible since PCORI. In fact, the results of Wayne’s trial were published a half-decade ago. I write this now with the assumption that there are clinicians out there who haven’t yet realized the growing interest of major stakeholders in the integrative health community’s historical desire for research that better reflects multi-modal, whole person and whole system approaches.
About the Author:

Integrative medicine and the conditions with highest productivity costs for employers