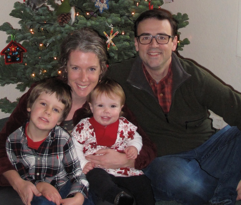 by John Weeks, Publisher/Editor of The Integrator Blog News and Reports Oregon mother of two Shannon Sell was in a 19-month battle with medical insurer PacificSource, and with state insurance regulators, over coverage of the home-birth services of her of Certified Professional Midwife, Lisa Lehrer, CPM, LDM, when news of the failure of the Republican repeal of the Affordable Care Act (ACA) hit. Sell shared that she found it “interesting timing” when the next day she opened her email to a note from the state that said, due to a section of the ACA, the insurer was planning to reimburse.Sell’s timely story reminds the licensed integrative health community of one very important, self-interested reason for supporting the ACA—there still appears to be life in the Non-Discrimination in Health Care (Section 2706).I reached Sell through my colleague Taylor Walsh, who knew of her story via his former role as director of the CoverMyCare Campaign (CMC). The CMC was created by the Integrative Health Policy Consortium (IHPC) to support patients and practitioners seeking to force insurers to follow the federal law. Sell had reached Walsh and IHPC early on when she was “living in a crazy double-speak world with insurers and regulators.” She said of IHPC that they “were incredibly encouraging—it was like having a companion on my journey.”

Yet the story she shared flowed like a nightmare myth out of Joseph Campbell’s Hero with a Thousand Faces. The journey has been arduous and not without major doses of lost faith in public agencies, to go with classic insurer obstruction.A few months before her daughter was born, Sell began looking into her coverage prospects. Through Googling around a few weeks later, she discovered Section 2706. More precisely, she discovered the statute at about the time when, through pressure from former U.S. Senator Tom Harkin, IHPC, and others, the Center for Medical and Medicaid Services (CMS) withdrew a guidance previously written to protect insurers from respecting Congressional intent to expand coverage. At that point, Sell believed she had solid ground for coverage.

Sell’s motivation was not the payment. She and her spouse were prepared to pay out of pocket as they had with their first home-birth. Rather, Sell took up the case “I think because of fairness—I wanted more women to have access to this amazing quality of care in a home-birth with a midwife.”Sell showed remarkable resistance. “I lost count of how many times someone said ‘no’,” she recalled. A first denial came from the broker for her employer-based coverage who should have been her ally. The broker, who was nominally her agent, defended PacificSource. She chose to push ahead directly into dialogue with the insurer. The agency tried to get her off the trail by arguing that midwives, while licensed in the state for dozens of years, were not qualified as providers. Sell pushed them through the multiple layers of appeal, during the second of which she stumbled upon 2706, the CMS guidance, and IHPC. Notably, the insurer’s decision letters repeatedly avoided direct response to why the birth was not covered under 2706.

Sell opened a parallel campaign with the Oregon Insurance Department. She had more hope from her public servants. The results were poor. In fact, in one response, the state agency directly echoed a PacificSource denial that had simply said that there was “no requirement” for coverage. During an extended, multi-call dialogue, a Senior Policy Analyst with the state argued that there was nothing in the insurance policy nor in state law that required coverage. Sell pushed back. “Why was there need for either of those if there was federal law?” she said.Sell continuously made a point of pushing the state and insurer reps to put their verbal answers in writing. “I am sure I wasn’t their favorite person,” she said. “I was like, whenever I get a reasonable explanation, I can let it go.”

Then, just over six months ago, after roughly 13 months of battle, she got her first positive sign. Someone from the state let her know that they had “identified some potential issues” that might support her case. They then gave her an odd hero’s charge. “They wanted to know if there was information from others, with similar issues, to get a sense of how broad was the complaint,” she said.What this had to do with the justice of her own complaint was never clear. While Sell was relieved by the spot of good news, she was asked to wait. A month passed. She followed up multiple times, to no avail. Then, she recalls, “The day after the ACA was not repealed, I opened my email to the news.”The relevant language:"...PacificSource has reviewed the Centers for Medicare and Medicaid Services (CMS) FAQ that provides additional clarification for provider non-discrimination requirements. The insurer has agreed that members who go to in-network Licensed Direct Entry Midwives can receive benefits under their policy. They also have agreed that members who seek out-of-network care by a Licensed Direct Entry Midwife would have their benefits paid at the out-of-network level the member policy permits (in a non-discriminatory manner)."Sell does not yet know what portion of the roughly $4000 for prenatal, postnatal, and birth services PacificSource will pay. She said it aggravates her that even though the insurer has no network of direct-entry, Certified Professional Midwives, they plan to treat Lehrer as an “out of network” provider.“It was ridiculous that I had to work this hard,” said Sell. She said she found it “extremely disheartening” in particular to have this treatment from the Oregon Insurance Commissioner. “We’re they trying to wear me down?  I don’t know. This was so clear from the beginning. There was really not much grey area here since the revised guidance [ from CMS].”However, she feels like perhaps there is a positive shift in insurer response in Oregon now. She has been hearing of other plans that are reimbursing through social media and e-mails.  Sell has been on the phone to her regulators to ask them what they are doing to train their workers, so that no one should have to got through what she did again.Comment: Non-Discrimination in Health Care remains on the books as long as the Republicans cannot mount their repeal. The explanation sent to Sell, and quoted above, can easily be transferable not only to licensed midwives in other states, but to multiple other types of uncovered or poorly-covered licensed, integrative practitioners. The trick for the heroes taking this on will simply to be to teach the Ogres to read. One obstacle, as Sell discovered to her chagrin, is to mistake those insurance professionals working in public agencies as public servants. Think wolves in sheep’s clothing. Sell’s work is the finest of passionate advocacy, for which we all owe a debt of thanks.
About the Author: