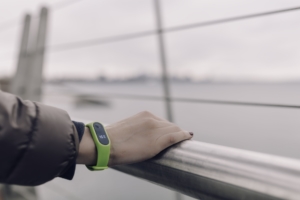 Use of activity trackers, such as wearable devices and smartphone apps, is on the rise, and a new study shows that 80 percent of users stuck with the device for at least six months. Though the gadgets may help motivate users to increase exercise, the populations that could benefit most may not be using the technologies. In the first national study of a large, diverse population, researchers at the Perelman School of Medicine at the University of Pennsylvania and colleagues, found that 1.2 percent of the study population engaged with devices, and that most of the individuals who started using an activity tracker were younger and had higher-incomes than people who opted not to use the devices. Overwhelmingly, participants used FitBit trackers (76 percent), with Apple devices being the second most common (9 percent).The authors say game design elements—such as points, levels, and badges—and financial incentives may have contributed to the sustained use of the devices, but the results provide valuable insights for wellness programs, insurance companies, and other program designers who should consider testing new and more targeted engagement strategies to motivate older and lower-income populations. The results of the study are published online today in the Annals of Internal Medicine and announced in a press release."Many people are excited by the potential of using activity trackers to monitor healthy behaviors, but there is very little evidence on who is using them and whether or not use is sustained over time," said Mitesh Patel, MD, MBA, MS, an assistant professor of Medicine and Health Care Management, and director of Penn Medicine's Nudge Unit. "We found that though use grew over time, it really varied depending on individual characteristics like age and income. We also found that once someone started using an activity tracker, sustained use at six months was high at 80 percent."In the study, researchers analyzed data from 2014-2015 for subscribers of a national health and wellness organization. The team of researchers tracked when participants first activated their activity tracker, how frequently the device was used in the first six months following activation, average daily step counts and sociodemographic characteristics.Results of the study showed that while overall activity tracker use was 1.2 percent, it was nearly double (2.8 to 3.1 percent) among younger individuals. During the two-year study period, only 0.1 percent of elderly persons (over age 65) activated a device, though 90 percent of those participants were still using it six months later. Individuals with annual household incomes less than $50,000 used devices at lower rates of 0.7 to 1.0 percent. The authors say the results suggest more effort is needed to initially engage individuals to start using these devices and that the findings may help programs better target their approach."Gamification and financial incentives are commonly used within wellness programs, but their impact has not been well studied," Patel said. "Our findings provide initial evidence suggesting that these types of engagement strategies may show promise for keeping sustained use high. However, more studies are needed to determine the best way to combine these types of engagement strategies with activity trackers to improve health outcomes. "
About the Author: