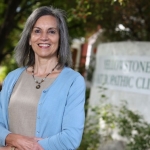 The late September 2016 push from Google Alerts was entitled “Yellowstone Naturopathic Clinic helps veterans treat pain through alternative medicine.” This was unusual: a piece on veterans and alternative and integrative medicine in Montana. I recalled that in July 2016 the founder of the clinic, Margaret (Maggi) Beeson, ND was awarded Naturopathic Physician of the Year by the American Association of Naturopathic Physicians (AANP). (photo credit is Casey Page in a Billings Gazette article on the award.) The question for the typically bi-coastal integrative health and medicine movement: what the heck is going on in Billings, Montana, the spreading flatland of Eastern Montana? 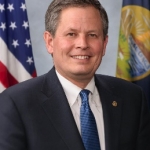 The proximal cause of the Clinic’s television coverage at KTVQ was a visit from Montana’s Republican US Senator Steve Danes (pictured right) to the Yellowstone Naturopathic Clinic (YNC). Danes’ was there to examine the integrative services provided to veterans through the Paul Gardner Veterans’ Pain Relief Foundation that Beeson and her associates created to support provision of otherwise non-covered integrative services. Gardner was a Montana veteran who died of an overdose. The Fund has raised OVER $40,000 in donations to support what was reported as “methods like chiropractic adjustments, acupuncture, massage and exercises to help alleviate chronic pain and ongoing pain from injury.”Danes left the experience at the clinic as an articulate advocate. In the minute-long video and copy on the news site, he states: “Veterans need to know they will have other choices besides just being prescribed medications and often times narcotics. We can do better than that. Let’s give our veterans other choices here that will deal with the root cause of the pain versus putting a Band-Aid over the pain."

The comments from Danes reflected the presence Beeson has established for the interprofessional YNC since she founded it nearly a quarter century ago. Billings is a medical hub of the region with two Level II trauma centers. Yellowstone Naturopathic Clinic is the most significant provider of integrative services in the region. Services include a Medical Center, Chiropractic center, Pain Relief Center, the Oasis Spa, as well as acupuncture services and a dispensary. In addition to Beeson, a 1989 naturopathic medical graduate of Bastyr University, the provider team includes 3 associate naturopathic physicians and 3 naturopathic medical residents, a chiropractor, a nurse-acupuncturist, massage therapists and an aesthetician. As noted below, Beeson has also developed a wide network of relationships with all types of health/medical care providers and businesses in Billings.The naturopathic residencies are part of why the AANP granted Beeson their highest annual award. Beeson co-founded the Naturopathic Education and Research Consortium to create more post-graduate opportunities in the field. Since 2007, the YNC has had a Naturopathic Oncology Residency as a partnership with St. Vincent Frontier Cancer Center through which the resident “works part-time in naturopathic primary care at our clinic, and part time at Frontier Cancer Center treating patients under the care of an oncologist.”

To establish the residency, Beeson pioneered the credentialing process within the St. Vincent Healthcare (SVH) system for herself and the ND residents. All of Beeson’s YNC residencies take advantage of the multiple relationships with medical doctor colleagues that Beeson has developed over the years. Among two dozen sites for rotations for the residents are the SVH/Frontier Center, Big Sky OBGyn, Cardiovascular Consultants, Mountain Land Physical Therapy and Gastroenterology, and Billings Clinic. Cumulatively, Beeson has sponsored 23 naturopathic residents through the Council on Naturopathic Medical Education-accredited residency program.Beeson has a special credibility for the work with veterans. This naturopathic physician and midwife began her medical career as a hospital corpsperson and became what was then essentially a physician’s assistant in the US Navy Medical Corps. She appears to have the ability to not only build relationships with colleagues, but also with patients. According to materials provided by those who nominated her for the AANP award, Beeson had a two month waiting list just one year after starting her original practice in Billings in 1992.Comment: The story of this clinic’s growth and penetration into the community is truly remarkable. Billings isn’t the liberal and integrative-friendly Missoula. It is, however, a community in which personal relationships can erode prejudices and create possibilities over time. Beeson and those she has drawn to Billings and the YNC have been working their skills and developing networks of pleased patients in that population for a quarter of a century. The continuous increases in these tributaries of civic respect become streams of influence.One testament to the presence that this integrative-naturopathic physician and her Yellowstone Naturopathic Clinic have gained in Billings came via a news account of a public forum on marijuana legalization that was covered last year in the Billings Gazette. The journalist noted that “few topics can spark debate like marijuana legalization, whether for medicinal or recreational uses.” The organizers of the event, Humanities Montana, brought to the panel (pictured left) diverse perspectives: the superintendent of a local school district, an oncologist at Bozeman Deaconess Hospital, the president of the Montana Cannabis Information Association, the Billings Chief of Police, and a retired federal magistrate judge. Humanities Montana chose a clinician known through her clinic’s care processes for integrating diverse ideas and practices to moderate the panel: Maggi Beeson, ND.I have known Beeson since she was a student at Bastyr and followed the trajectory of YNC’s growth throughout the years. Its combination of clinical and integrative academic mission has made YNC an example of how integrative care can plant itself as a community resource. The story is a sort of arrival for integrative services that is rarely seen anywhere else. Conference planners would be smart to invite Beeson to presentations on this model. The Billings Gazette story on Beeson’s award is here
About the Author: