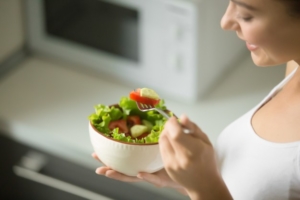 Triglycerides, a type of fat in the blood, are important for good health. But having high triglycerides might increase a person's risk of heart disease, and may be a sign of metabolic syndrome--a combination of high blood pressure, high blood sugar, and too much fat accumulation at the waist. People with metabolic syndrome have increased risk for heart disease, diabetes, and stroke.A new study from nutrition researchers at the University of Illinois shows that some individuals with variations of a "gene of interest" may be at an even higher risk of developing high triglycerides, according to an October 24 press release. Specifically, researchers looked at genetics and risk in a group of young Mexican adults.Despite genetic predisposition, the study shows that maintaining a healthy body weight or changing diet can help reverse the risk.The study, published in the Journal of Nutrigenetics and Nutrigenomics, is a collaboration between the University of Illinois and the Autonomous University of San Luis Potosi in Mexico (UASLP), also known as UP AMIGOS. The project addresses genetic and environmental factors associated with obesity and related conditions among younger adults in Mexico.For the current study, researcher Katie Robinson says she was interested in a protein made in the liver called fetuin-A (FetA). "It's an interesting marker connecting inflammation with obesity and its associated diseases," she says.FetA is a protein that is released from adipose tissue and also the liver."We know FetA is integral to insulin sensitivity, and that's where most of the research has been done to look at its function," says Robinson. "We also know that FetA is elevated in obesity and diabetes. Therefore, we were interested in looking at the genetic implication. If there are alterations or single nucleotide polymorphisms within the gene that codes for FetA, does that change somebody's risk for obesity or the associated diseases?"To answer that, the researchers looked at bloodwork from 641 Mexican young adults to analyze biomarkers and genotypes. They also checked body mass index (BMI), took measurements of fasting glucose levels, and had the participants report on their dietary habits.From the genotyping, they were specifically looking for occurrences of two mutations of the gene, AHSG, a gene that influences the protein FetA. They were interested in the association of those gene mutations with dietary intake, weight, and also biological markers of health.The AHSG polymorphisms were found to be associated with triglycerides. Robinson explains the most important finding is that one of these polymorphisms, or mutations, was associated with higher circulating triglycerides, but that correlation was very dependent on BMI and dietary intake. The relationship was exaggerated in individuals who were overweight."So with an elevated BMI, we saw greater disorder within those carrying the risk genotype," says Robinson. "But if these individuals who had the high-risk AHSG genotype had a lower BMI, their triglycerides were lower. It suggests that even if you carry the high-risk genotype, you don't have a greater risk of high triglycerides if you can maintain a normal BMI or a lower BMI, which I think is a positive finding when we look at genetics."Robinson says diet also played a role in higher triglycerides. "Higher carbohydrate intake, specifically sugar or sucrose intake, was associated with elevated triglycerides," she says. "This association was mainly in one genotype group. The thought was perhaps these individuals are more sensitive to certain diets than the other genotype groups."Regardless of genotype, elevated BMI was associated with higher triglycerides. Due to the relationship between FetA and diabetes, the researchers also wanted to see if there was an association with AHSG mutations and glucose, but surprisingly, they didn't find any.While the study looked at relatively healthy young adults in a Mexican population, results were different than what has been observed in previous research from Caucasian groups. Robinson explains that they might have seen different results if they had looked at older Mexican adults with poorer health.Some good news from the study's findings is that maintaining a healthy body weight often can overcome the effects of genes related to metabolic disease and type 2 diabetes."We know that genes aren't everything," Robinson says. "There are a lot of things we can do, behaviorally, to change our individual risk. It's a silver lining in our research. We can't modify our genetics, but we can modify our epigenomes and some behaviors. You can still have positive health outcomes."The results are also important for the future of developing personalized nutrition as interventions for disease, Robinson says."In practical terms, it would be ideal to start by understanding someone's basic biology, which may influence how they're metabolizing and utilizing the nutrients they are eating. It would be great to bring people in, find out where their biology is at, and then tailor a diet for them, but we need a lot more research before we get to that point."
About the Author: