by John Weeks, Publisher/Editor of The Integrator Blog News and ReportsThe CEO of Aetna Health, Mark Bertolini, had a horrible ski accident that left him in great pain. In his long recovery, he discovered that he couldn’t function well under the adverse effects of the opioids and other medications that regular medicine and insurance companies support. He found relief in yoga, acupuncture, meditation, and the services of a naturopathic doctor. The stories are all too familiar.Cases like Bertolini’s struck a chord with the outspoken octogenarian and former editor of the Journal of the American Medical Association (JAMA), George Lundberg, MD, pictured. Lundberg was an immensely successful editor of JAMA, whose 17-year term ended in 1999 when he was let go. One reason was, in many estimates, a special issue on complementary and alternative medicine that JAMA published in 1998, much to the dismay of his colleagues. He drew attention to JAMA. and also drew antagonism of those who felt he was diminishing the journal’s reputation.

Now, Lundberg works as an editor-at-large for Medscape, sharing his experiences both in audio and print in “Sciatica: A Love Story.”  He describes how he had a return bout with the condition that had bothered him for some time while on a business trip in the Bay Area. The pain required him to bend over at the waist to gain any relief.“Uninvited, an orthopedist told me bluntly that I probably had foraminal stenosis, needed nerve function measurements, and would probably require back surgery,” he writes.He’d already learned that pharma did little for him.“A woman, unknown to me, urged me to have acupuncture because it worked for her sciatica,” he continues.Soon after, Lundberg put out a query on social media, looking for someone who specialized in acupuncture. The next morning, still fully gripped by pain, he received a response from a graduate of Five Branches University, who had an office in San Jose.Lundberg describes how he brought in his “acute, excruciatingly painful, lancinating, searing, burning, right buttock, thigh, leg, and foot pain” that he knew did not respond to nonsteroidal anti-inflammatory drugs. 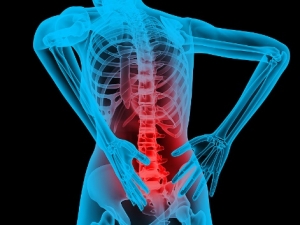 “I met [the acupuncturist] at 9:30 AM, still walking bent forward at a 90 degree angle,” he writes “After 90 minutes of deep massage (including the psoas muscle), multi-needle acupuncture, soft music, and Kinesio Taping, my lower back over a smelly poultice, I got off the table, stood erect and pain free, and met my large family for Mother's Day brunch. Three days later, I did an all-day visiting professor gig at the University of California, Davis, including presenting grand rounds. After three more days, I gave the commencement address at the University of Alabama School of Medicine, all pain free.”Lundberg goes on to describe a second incident with acupuncture for his sciatica, which was also successful.“I walked, bent at 90 degrees, into the same San Jose acupuncturist's office,” he writes. “Ninety minutes later, after the same quadruple therapy, I stood erect, pain free, and I walked out fine, to drive myself home. That was five days ago. So far, so good. Do I believe this treatment works? Oh yeah! You better believe I do. Does Medicare or my supplemental Blue pay for it? No, but I am working on that. Maybe some insurer will see this column. Stay tuned.” 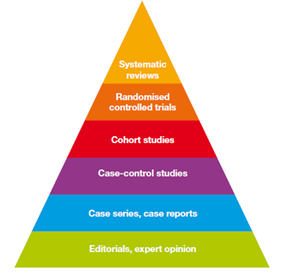 CommentLundberg speaks of his experience as an “N of 1”—a form of evidence that high-minded researchers tend to dismiss as hearsay. Even when published according to the exacting CARE Guidelines case report standards, these are near the bottom of the evidence hierarchy.  In fact, the only thing below case reports, in one such scheme (see pyramid) is “editorials” or “expert opinion.” This is exactly what Dr. Lundberg is doing in his column.However, when the editorial is from someone like Lundberg, these hierarchies get pushed aside for a different sort of hierarchy: It ain’t what you know, it’s who you know. Or, in this case: It ain’t what is said, but who is saying it.A rose may be a rose may be a rose, but “evidence” is not “evidence” is not “evidence.” A study from a research team in Beijing may not weigh as much as the same study out of Harvard. Lundberg’s tale of relieving sciatica may weigh more than the tales of thousands of patients who came before him. With the Medscape megaphone, and from the mouth of the former 17-year editor at JAMA, acupuncture works.Here’s hoping that all insurers consider the Lundberg piece mandatory reading.
About the Author: