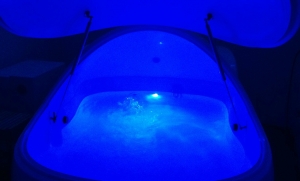 While sensory deprivation tanks, also known as "float tanks," have been widely popular in the athletic arena, more and more integrative professionals are adding them to their menu of services  for their physical and mental health benefits.

According to the Journal of Psychology and Health, sensory deprivation is the purposeful removal of stimuli to one or more of the human senses. This can lead to a relaxed state, even falling into a state of meditation.

Float tanks—which can be pods, pools, cabins, or rooms—contain roughly ten inches of skin temperature water, about 93.5 degrees, and one thousand pounds of medical grade Epsom salt. The air in the tank is also heated to skin temperature. The ears remain under water, dampening sound, and the user is in control of the door and light inside the tank. When the door is closed, the light is off, creating a distraction-free environment.The salt solution makes floating effortless, taking pressure of gravity off muscles and joints, reducing stimulation of the senses, and providing the body with magnesium.The first float tank was developed in 1954 at the National Institute of Mental Health NIMH by neuro-psychiatrist and medical practitioner, Dr. John C. Lilly.  The tank was developed to test the hypothesis that if all external stimuli are cut off then the brain would go to sleep. His findings were contrary, in fact, a surprising amount of cognitive activity takes place in the absence of stimuli.  He went on to use the tank to study the origin of consciousness and its relationship to the brain.

A study done by the European Journal of Integrative Medicine saw patients show improvements in physiological changes, alleviation of medical conditions, relaxation, personal growth and enhancement, and an altered state of consciousness. Additionally, according to the Journal of Psychology and Health, a study showed to improve cortisol levels and lowered blood pressure.

How a pandemic impacts sleep and behaviors