Beyond adrenal fatigue: Moving towards an evidence-based understanding of hypocortisolism

In 1936, Hungarian endocrinologist, Hans Selye, proposed the General Adaptation Syndrome, the chronological progression from health to disease caused by prolonged exposed to “noxious stimuli," later termed “stress."  He described three distinct stages through which this process predictably occurred.  Although the precise mechanisms underlying the progression from the first stage of “alarm” to the final “state of exhaustion” were unclear, Selye believed the process was influenced by dysfunction in both the endocrine and immune systems.Since Selye’s heralding work, extensive scientific research on the stress response and stress-related bodily disorders has made it abundantly clear that the stress response system is not a simple, linear system, nor is its activation and function determined by only one structural or hormonal component.  Rather, the stress response is a complex, intricate neurobiological network comprised of a vast range of mutually interacting chemical and hormonal mediators and modulators, whose functionality is influenced by numerous superimposed secondary factors.Despite our enhanced understanding of the stress response and its impact on health and disease, the management of stress-related bodily disorders continues to present a great challenge for healthcare providers.  This is, in part, due to the paucity of stress education offered by conventional medical training.  As such, much of the popular and clinical focus on the stress response has highlighted the adrenal glands and their production of cortisol.  Specifically, any maladaptive physiologic response to stress has been attributed to ‘adrenal fatigue’, a hypothesized condition whereby the adrenal glands become ‘depleted’ or ‘exhausted’ in response to chronic stress exposure. While it is evident that Selye’s General Adaptation Syndrome likely served as the springboard for this notion, research on low cortisol states, and HPA axis dysfunction has shown, that the pathophysiological basis for the observed progression is significantly more complex.The scientifically-accepted term for low cortisol states is hypocortisolism.  Hypocortisolism has been associated with such conditions as fibromyalgia, chronic fatigue syndrome, and post-traumatic stress disorder, and data suggests that the "symptom triad" consistently observed in these patients includes chronic pain, fatigue, and hypersensitivity to stressors.  While clinical associations have been noted between hypocortisolism and mood disorders, cardiac disease, cancer recurrence, and the aforementioned conditions, states of low cortisol may also have beneficial effects on an individual, depending on the cause.There are two manners in which hypocortisolism can manifest.  One occurs when there is a loss of the normal circadian pattern of cortisol release resulting in a ‘blunting’ or flattening of daytime basal cortisol levels.

The other is when exposure to a known HPA axis stressor does not induce an expected rise in cortisol release. 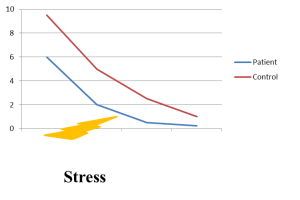 Numerous scientifically-valid explanations exist to explain potential mechanisms through which hypocortisolism evolves, and isolated, independent “failure” of the adrenal glands to produce cortisol in response to chronic stress exposure has never been scientifically corroborated.  In fact, the majority of research indicates that low cortisol states arise mainly when dysfunction of the HPA axis results in hypersensitivity to cortisol induced negative feedback.Recall the basic HPA axis negative feedback mechanisms: 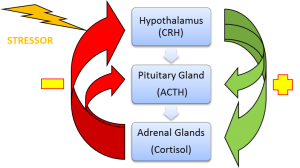 Under normal circumstances, stress-induced activation of the HPA axis results in the release of hypothalamic and pituitary stimulatory hormones, which then command a rise in adrenal cortisol production.  Elevated levels of cortisol inhibit the ongoing release of central stimulatory hormones via negative feedback, thus mitigating the development of unrestrained hypercortisolism and the negative consequences thereof.  States of hypocortisolism result when the central regulatory structures, particularly the hypothalamus, become hypersensitive to cortisol’s inhibitory control leading to chronic suppression of HPA axis activation and cortisol release. So what causes the majority of HPA axis dysfunction?There are numerous endogenous and exogenous factors that can either directly contribute to HPA axis dysfunction or indirectly influence the integrity of the HPA axis, and hence affect basal and stimulated cortisol levels.  Table 1 includes some of these factors.Table 1:  Factors Affecting HPA Axis Function and Activation

The manner in which each of these factors can contribute to HPA axis dysfunction is complex and beyond the scope of this review.  However, with respect to dysfunction of the adrenal glands as the primary cause of low cortisol states, there are some evidence based contexts in which this does occur.  Addison’s Disease is the extreme example of ‘hypoadrenia’.  However, some of the other adrenally-medicated causes of low cortisol include:

I have been researching, teaching, and writing on the topic of stress, stress related bodily disorders, and HPA axis dysfunction for over a decade.  This field of medicine is as complex and fascinating as it is daunting.  It is critical that those of us managing patients with stress and any health issues related thereto (which is probably everyone) do our due diligence to better understand this process more thoroughly.  We cannot simply diagnose our patients with ‘adrenal fatigue’ because conceptualizing the vast nature of the true underlying processes is too difficult.  Low cortisol states do not imply that the adrenal glands have become ‘exhausted’.  Rather, low cortisol states simply reflect underlying HPA axis dysfunction, whatever the cause.  Hypocortisolism is always the harbinger of something else, whether it be underlying medical conditions or disease states or one’s age or gender.  Look beyond a patient’s salivary cortisol and ask yourself now what but "why?"

Heim C, Ehlert U, Hellhammer DH. The potential role of hypocortisolism in the pathophysiology of stress-related bodily disorders. Psychoneuroendocrinology. 2000;25(1):1-35.

An overview of "inflammaging"