Are Glyphosates the Achilles' Heel for GMOs?

A remarkable new video is up on YouTube: From DDT to Glyphosate: Rachel Carson, We Need You Again! The 10-minute video is the brainchild of safe food and integrative health activist, Ruth Westreich. The focus is on glyphosate-based herbicides - including the ubiquitous Round-up - that the World Health Organization has declared a likely carcinogen. Yet there is another actor mostly just off-stage in this: genetically modified organisms (GMOs). The video suggests that

campaigning against glyphosates be the best way to attack two health concerns with one stone.Glyphosates are problematic in themselves. They are associated with infertility, and diseases of the thyroid, liver and kidney, and with diabetes, obesity and stroke. A WHO panel considered this a basis for a report that the industry has fought to discredit. Nevertheless, according to the video’s narrator, the US government does not officially acknowledge any connection. 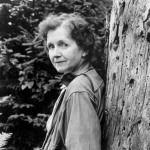 Cut to post WWII United States. US industry wartime vendors came home and turned their chemicals toward peace-time uses. A 1947 advertisement blithely rhymes: “DDT is good for me.” Clouds of the chemical spew over crowds of children. In precious footage, scientist Rachel Carson (pictured right), author of A Silent Spring, issues her clarion call that effectively kicked off the environmental movement. The viewer is reminded of the great powers of ignorance, denial, and industry protection that can turn fully-blind senses to the evidence.The subtheme is the fascinating symbiotic relationship between glyphosates and GMOs. Geneticist Michael Antoniou, PhD shares that 80% of GMOs have “basically been engineered to tolerate the application of herbicides.” The crops are “associated with pesticides” and “as a result,” the combination “is a cocktail that has converted our food supply into a slow poison.”The video illuminates an odd silver lining. Again, according to Antoniou, “outside Europe, 90% of all GMOs are dependent on glyphosates.” The argument is that GMOs help us to feed the world and the quiet ways that they penetrate the food supply may ultimately put up a protective veil around them. Herbicides and pesticides are another thing. Might it be the best strategy – for those who are particularly passionate about GMOs – to go after banning the substance on which GMOs have been bred to depend? Might glyphosates be the Achilles heel for GMOs?The video ends with an upbeat call to action, and a list of websites of national and global organizations working against the poisoning of our food, our planet, and ourselves. 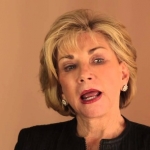 Comment: In a private note notifying colleagues of the video, the producer of the video, author and integrative health, medicine and food activist and artist Ruth Westreich (pictured left) shared some of her thinking. She’d attended a meeting in which Salk Institute scientist Dave Shubert, PhD and others shared that they believe that Glyphosate is “the low hanging fruit with respect to increasing the grassroots efforts to inform the public.” The logic is simple: go after an agent that is, in itself, a risk and possibly take down two. If you only succeed at the first, more power to us. Westreich, co-author of the soon-to-be-released Creativity Unzipped “left with the idea that [she] should produce a short YouTube video contrasting where we are now with the use of pesticides and herbicides (Glyphosate).”The video is a great resource that is likely an especially useful tool for people who have never thought much about either glyphosates or GMOs. I know that the palpably noxious nature of herbicides and pesticides incites my own spirit to more instinctive action. Take a look. Muse on the time travel to past times of industry-sponsored ignorance. Share the video!
About the Author: