by John Weeks, Publisher/Editor of The Integrator Blog News and ReportsFollowing decades of professional leadership, integrative health lobbyist and president of the Association of Chiropractic Colleges (ACC), David O’Bryon, JD, CAE has been recognized for his role in chiropractic policy and education.

The American Chiropractic Association (ACA) awarded O’Bryon with “The ACA Special Award of Honor” and publicly thanked him for his “tireless and distinguished efforts as an effective advocate amidst the halls of Congress before executive branch agencies and within the nation's higher education community for the chiropractic profession and patients everywhere.”Prior to his work at the ACC, O’Bryon was a senior Congressional staffer for U.S. Representative Gilbert Gude and U.S. Representative Newton I. Steers, Jr. He was previously award the LL.D. degree (Hon.) from Logan College in 2001. He had been previously honored by the ACA in 2002 as “Humanitarian of the Year”. The following year, the Fellowship of International Chiropractors named O’Bryon a “Fellow” and in 2006 the Federation of Chiropractic Licensing Boards recognized him with the “Presidential Recognition Award” for service to the chiropractic profession. O’Bryon currently volunteers as president of the Federation of Schools of the Allied Health Professions and also serves on the Secretariat of the National Association of Colleges and Universities.Comment: Much of the political advancement of the chiropractic profession in Washington, D.C. has been forged by a close, smart partnership between the American Chiropractic Association and the Association of Chiropractic Colleges, which O’Bryon has led for nearly 3 decades. The chiropractors took the brunt of AMA derision of any challengers to its way of doing business in the 1960s through the 1980s with their slandering of the field as “quacks” and “frauds.” So it always seemed a very smart path for the chiropractors to lead with an academic foot forward as they made their way in Congress. More often than not, the foot has been that of the savvy O’Bryon – with or without one of ACC’s 17 college and university presidents in tow.Another area where O’Bryon has also helped lead the chiropractic profession out of its feisty silo has been through interprofessionalism. The two volunteer positions noted above are examples. O’Bryon has always known that by showing up and forming relationships, potential opens. 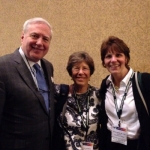 From the earliest days of the integrative care movement, O'Bryon has brought chiropractors to the table in significant ways. He's often done so despite resistance from chiropractic colleagues who didn't like being associated with "complementary and alternative medicine." He was chair of the educational efforts of the Integrative Health Policy Consortium when they initiated the ground-breaking 2005 National Education Dialogue to Advance Integrated Care: Creating Common Ground. In 2004, O’Bryon was among the founding members of the board of what is now the Academic Collaborative for Integrative Health, for which he presently serves as chair. In these interprofessional capacities, O’Bryon has been a continuous fount of knowledge on the manners and processes of the Beltway. I’ve been pleased to have had him as a long-time colleague at ACIH and elsewhere. The picture depicts O’Bryon with ACIH executive director Elizabeth Goldblatt, PhD, MPA/HA and ACIH board member Karen Bobak, DC, EdD.
About the Author: