by John Weeks, Publisher/Editor of The Integrator Blog News and ReportsEditor’s note: This analysis article is not edited and the authors are solely responsible for the content. The views and opinions expressed in this article are those of the authors and do not necessarily reflect the official policy or position of Integrative Practitioner.From time to time, the Vatican hosts summits in critical issues. One such momentous concern, for Pope Francis, is climate change. On November 2-4, 2017, the Vatican Pontifical Academy of Sciences hosted “Health of People, Health of Planet: Our Responsibility.” Among the participants and presenters was integrative cardiologist Mimi Guarneri, MD, the founding president of the Academy of Integrative Health and Medicine. The gathering led to a declaration for which Guarneri was among the signatories.The meeting was one in a series since 2015 given Pope Francis’ prioritization of the issues of climate change and environmental degradation.  Those convened ranged from scientists to policy makers and theologians and also included some elected officials and world leaders.  Among the roughly 100 participating were Jeffrey Sachs, California Governor Jerry Brown, a Chilean governor, and multiple Nobel Laureates. The Miraglo Foundation, co-founded by Guarneri and Rauni Prittinen King, RN, was a co-sponsor of the gathering. 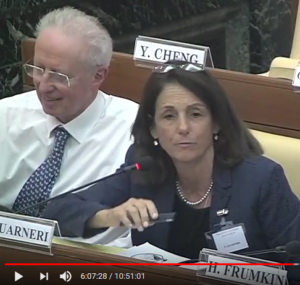 At a 2015 meeting on the topic, the participants issued a statement that soberly concluded that ”only a radical change in our attitude towards Creation and towards our fellow humans, complemented by transformative technological innovations, could reverse the dangerous trends that have already been set into motion inadvertently.” The 2017 meeting was convened to focused on solutions. If the former was “To Err is Human,” this one was “Crossing the Quality Chasm.”Guarneri has an opportunity to present from her position in the chambers on the second day. (The comments begin at 6:07:10 on this link.) She spoke as a clinician sharing “systems models of delivery” of clinical and health services that are “very different from what we are currently doing.” She introduced AIHM as an organization “brought together not based on degree but on philosophy.” She described the distinctive role of a broad integrative model to health care as one that focuses on “creating health” - in contradistinction to the “ill-to-pill mentality” that dominates biomedicine.  Guarneri called out, for instance, the growing knowledge of the roles of the same toxins that damage the external environment on the increasing rates of multiple chronic conditions. Guarneri also shared a quick review of some examples of successful models in medicine, in agriculture and in other environments.Subsequent to the workshop, the Vatican published the “Declaration of the Health of People, Health of Planet and Our Responsibility Climate Change, Air Pollution and Health Workshop”. The declaration includes 12 “scalable and practical solutions” that governments and other stakeholders were urged to take. Among these are two that are particularly close to Guarneri’s message: 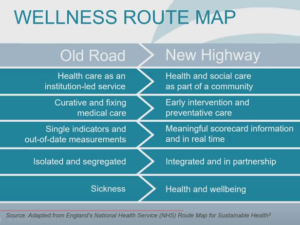 The 12th proposed solution also included a critical role for healthcare providers in a broader “alliance with society” and with multiple stakeholders as expressed in Pope Francis’ encyclical Laudato Si: “We call on health professionals to: engage, educate and advocate for climate mitigation and undertake preventive public health actions vis-à-vis air pollution and climate change; inform the public of the high health risks of air pollution and climate change. The health sector should assume its obligation in shaping a healthy future.”In a moment of questions following Guarneri’s formal presentation, one of the conveners volunteered that he was Mimi’s cardiology patient. He said she had got him to change his diet and start exercising - “I’m still doing it” – then added that “the price she had to pay was I started giving her lectures on climate change.”Comment: Two months ago, I reported here how integrative leaders were among those joining with the Global Wellness Institute in calling for a Wellness Moonshot. Not long thereafter, Yale integrative medicine leader David Katz, MD, MPH co-led an effort through the True Health Initiative that produced a letter to the secretaries of health for the Group of 7 nations, co-signed by 40 global nutrition leaders, to urge a radical shift in food policy. Now here is Guarneri, promoting an integrative view toward health creation with 100 global luminaries at the Vatican. Quite a trifecta of bold calls for action. If only these each came with policy power and budgets! Good to see integrative voices at these tables and stimulating these actions.One outcome of the Pope’s gathering was that a globally influential group received an education about integrative health and medicine. Guarneri proved herself a terrific emissary. An early slide showing an obstructed artery reminded those in attendance that she had the vantage point, as an invasive cardiologist, of a person who could be comfortably benefitting from the disease-focused medical industry. She used that early teaching moment about heart disease to quickly make a point, sharing the deepening link between toxins in environmental degradation and chronic disease. Her systemic view came into focus. (Guarneri’s credibility wasn’t hurt that the group knew through others that one of its chief conveners was her patient!)Yet for Guarneri, the fit was all the stronger with her work at AIHM where she and colleagues have been directly linking the concept of integrative medicine with broader determinants of health, including the environment, since the organization’s founding. AIHM’s annual conference is sub-headed “People, Planet, Purpose.” Her personal website echoes this, greeting visitors with: “Healing People and the Planet through the Wisdom of Global Healing Traditions.”  She and King have been involved globally through Miraglo. She and AIHM have increasingly been involved institutionally with global health through connections to the WHO and Pan American Health Organization. The right person for the job.Guarneri closed with a bow to the meeting’s sponsor, Pope Francis. She pointed to the overarching influences that the systems of economic exchange we chose will have on the health of the planet and of people through quoting a statement of Pope Francis on July 9, 2015: “The economy should not be a mechanism for accumulating goods, but rather the proper administration of our common home. It is an economy where human beings in harmony with nature, structure the entire system of production and distribution in such a way that the abilities and needs of each individual find suitable expression in social life.”
About the Author:

Food fix for health, the planet, and community

The role of environmental toxins in disease

How food can save health, economy, community, and planet