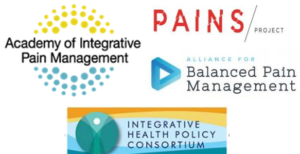 by John Weeks, Publisher/Editor of The Integrator Blog News and ReportsOctober 21-22, 2017 may go down as the fulcrum moment that leveraged the U.S. toward an integrative pain treatment focus. The 70 participants from over 50 key organizations left the invitational event “100% aligned with what needs to happen – there is consensus that we need to find a way to access integrative approaches,” shared Bob Twillman, PhD in a post even interview for this article.The first Integrative Pain Policy Congress, as it was called, took place in San Diego. It was led by a quartet of organizations: Academy of Integrative Pain Management (AIPM), for which Twillman serves as president;  Integrative Health Policy Consortium (IHPC);  PAINS Project; and the Alliance for Balanced Pain Management. The organizers had four goals: 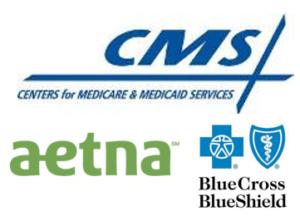 The guest list for the invitational gathering included some key decision-makers in US healthcare. In the center of the dialogue were government and private payers. Said Twillman: “In a survey of the attendees before they arrived – 65 of 71 responded – payer’s reimbursement policies were identified by 90% as the top barrier.”  The Center for Medicare and Medicaid Services (CMS) was represented by two top personnel. Aetna, Blue Cross Blue Shield, and American Specialty Health – the dominant complementary health managed insurance firm – had representatives. The US Veterans Affairs (VA) and Department of Defense (DoD), which have been on the front lines of covering integrative care, were each well represented.Twillman said that one critical step will be a consensus definition of “integrative pain care.” He noted that while there was some dissent, the “integrative” term held as the shared direction for the field. Others preferred “multi-disciplinary” or “inter-disciplinary” concepts that can diminish the broader “integrative” set of contributors supported by emerging pain science.Pushing the consensus were research data from that science. “I think the payors were surprised by how many meta-analyses were out there,” Twillman assessed. In addition, the payors also had a chance to see “the caches of evidence from the VA and the DoD.” The fact that the evidence supporting current opioid strategies was wanting was not lost on these participants.

One key outcome Twillman shared was that the CMS representatives left the meeting with a promise to thoroughly review their regulations “that govern what they approve,” with a mind to see just how much authority they might have for making changes without additional Congressional activity. Typically, in the United States, inclusion and coverage actions at CMS shape coverage policies of insurers.With the focus on Medicare, Twillman called out pre-meeting contributions of Beltway activist and writer Taylor Walsh, of Integrative Health Strategies. In a series of meetings and presentations over the past year, Walsh began forging relationships for integrative health and medicine among CMS principals, building interest in the field, and thus in attending the meeting. Recalled Twillman: “There was pioneering by Taylor this year that was instrumental in opening up a number of possibilities within CMS.” Walsh included his colleague integrative health advocate and former CMS deputy director for strategy Karen Milgate in some of his fruitful outreach.One product of the meeting is a repository of key documents and white papers on pain coverage and strategy developed by the organizers prior to the meeting to support the dialogue. Twillman singled out the work of the members of IHPC’s Partners for Health for “populating the data repository” with quality information. He also noted the important contributions of IHPC’s long-time president Len Wisneski, MD, in much of the dialogue during the meeting. Twillman said that he planned to explore making the repository available to anyone with an interest in the field. 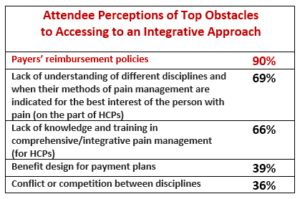 Immediate next steps are to publish a summary, within the next two weeks. Twillman anticipates that it will be published on the AIPM site and elsewhere. This document will include “next steps” established in 3 breakout groups at the meeting. He also foresees expanding the group’s outreach to include such groups as the National Governor’s Association – which has an opioids-related working group – and the Association of State and Territorial Officials.Comment: Credit the power of a collaborative of 4 organizations to engage 50. The importance of the consensus definition including “integrative” cannot be overstated. (Then again, I am guessing that the meeting would likely have exploded, had it not.) Similarly, the pre-meeting contributions of Walsh, of which I have been aware, merit re-affirming. The integrative health field has always been held back for a lack of people on the ground in the Beltway showing up, pressing the flesh, following up, and working relationships with decision makers.  Walsh has done just that with Medicare. His persistent, unpaid labor is evidence of just how critical such on-the-ground action can be. The field owes him a debt of gratitude for this one. (Disclosure note: while I was not involved with the meeting planning, I am a member of the IHPC Board of Directors.)Editor’s note: This analysis article is not edited and the authors are solely responsible for the content. The views and opinions expressed in this article are those of the authors and do not necessarily reflect the official policy or position of Integrative Practitioner.
About the Author: