Food as medicine starts in the kitchen (recipes included) 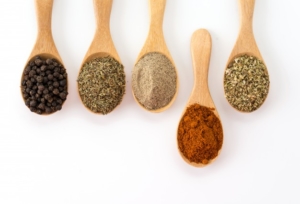 Andrea Beaman, HHC, AADP,  a natural chef and holistic health coach displayed an array of herbs and spices along the podium at the 2018 Integrative Healthcare Symposium annual conference in New York City."This is medicine," said Beaman. "And it's in your kitchen right now."Culinary herbs and spices have been used medicinally for centuries. In Ancient Egypt, coriander, fennel, juniper, cumin, garlic, and thyme were considered  health promoting, and workers on the Great Pyramids regularly consumed garlic for strength and vitality. Hippocrates, the father of modern medicine, wrote about the medicinal uses of thyme, coriander, cinnamon, mint and marjoram."Everything we eat has a physiological effect on the body," said Beaman. Here are just a few of the effects:The flavors we eat affect the body as well. Sweet has a retarding effect and too much can cause aches in the bones and weight gain; sour has a gathering and astringent effect and too much toughens/tightens the flesh; salty has a softening effect and too much salt hardens the pulse; bitter has a strengthening effect and too much withers the skin; and spicy/pungen has a dispersing effect and too much pungent knots the muscles.

"When the plate comes to the table, look at it, smell it, involve all of the senses," said Beaman. "Where's the connection, we've lost it. It's good that we connect with it once in a while."

Rosemary is carminative, antispasmodic, antidepressant, antimicrobial, emmenagogue (stimulates blood flow in the pelvic area), and rubefacient (causes dilation of capillaries, increases circulation). It also decreases anxiety and improves alertness.Historically, rosemary has been used in the German pharmacopoeia for heart complaints. It increases blood flow to the heart and stimulates memory. Externally, rosemary oil stimulates hair follicles and circulation in the scalp. Steep in oil or vinegar and use to flavor foods, or use as an infusion.Rosemary tea Put rosemary into a tea ball. Pour boiling water on top. Steep 7-10 minutes. Use to clear nasal congestion, improve memory, expectorate chest congestion, and to help lift depression.Oregano Oregano is an antiseptic, antibiotic, antifungal, carminative, expectorant, and a diuretic. Researchers have found compounds in oregano that kill many of the bacteria that cause food poisoning (E. coli, Salmonella, Listeria, and Shigella). It improves digestion, kills intestinal worms, and treats bronchial membranes.Traditionally, oregano was used in Traditional Chinese Medicine to treat gastrointestinal and respiratory conditions. It warms the blood and lifts the spirits.Chimichurri Put all ingredients into a food processor or blender and puree until all the ingredients are combined.Oregano, highly aromatic, helps to lift the spirits and inhibit overgrowth of bacteria. Other herbed sauces with similar ingredients include Pistou and Pesto. Parsley is a classic diuretic with affinity for the kidneys.CinnamonCinnamon is antiseptic, anti-clotting, antimicrobial, a circulatory stimulant, and diaphoretic . It Regulates glucose metabolism.Greeks and Romans used cinnamon to treat indigestion, and it is highly effective for gastrointestinal disorders and preventing digestive infections. Cinnamon warms the body and improves blood sugar metabolism.Mulled CiderPut all ingredients into a soup pot and bring to a boil. Reduce heat to simmer, cover, and cook 1-4 hours. The longer your cook, the more pronounced the flavor of the healing spices.Decoct dried spices, fungi, roots, seeds and berries. Allspice is a berry that contains eugenol (infection fighter, antiseptic, anti-inflammatory). Star Anise is a seed pod rich in shikimic acid (anti-viral, anti-fungal). Cloves are dried flower buds from an evergreen tree that can be used as a pain relieving anesthetic. Cinnamon, the inner bark of a tree, used for warming the kidneys and balancing blood sugarWhen you get a virus, your body naturally heats up, said Beaman. The flu lingers if you cool is down. Heat it up even higher with a recipe like this mulled cider, sweat through the night, and you'll be feeling better by the next day.Sage Sage is a carminative, antispasmodic, antimicrobial, astringent (toning, tightening), and anti-inflammatory. It aids in digestion of fats.Due to strong anti-microbial properties, sage was traditionally added to meat/sausages as a preservative. In Medieval times, sage was added to ale to toast good health.Sage is also a classic remedy for inflammation of the mouth, throat, and tonsils. It decreases sweating, which is good for use during menopause. For a sage infusion, pour hot water over sage and steep overnight.
About the Author: