by Laura Lagano, MS, RDNMarijuana has been approved for therapeutic purposes in 23 states plus the District of Columbia. By 2017, it’s estimated that upwards of 10 states will join that list.Whatever your personal, political or professional stance on the issue, the reality is that medical and clinical marijuana is in your state, soon-to-be in your state, or coming to a state near you very soon.What this means for practitioners is somewhat different for each state. Some states such as New York and New Jersey dictate the specific conditions for which doctors can recommend cannabis. Others, such as California and Colorado, allow practitioners to exercise clinical judgment. 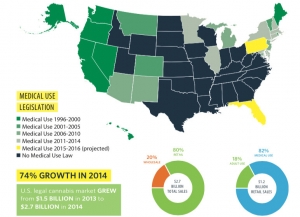 Medical attitudes toward cannabis range from vilification to whole-hearted embrace. Many practitioners—especially those in states with liberal regulations--are trying to figure out if cannabis is, indeed, “real” medicine. If so, for what is it truly useful, how is it best administered, and where does it fit into the spectrum of therapeutic options?With all the recent controversy over medical marijuana it is easy to overlook the fact that this ancient plant, which was introduced into “modern” medicine in 1839 and admitted to the United States Pharmacopeia in 1851, has only been deemed illegal since 1937. It was removed from the USP’s 12th edition in 1942 against the advice by the American Medical Association. It was not until 1970 that it was added to the federal controlled substances list.Though California led the pack with medical marijuana approval in 1996, the recent approvals by Colorado and Washington state have spurred more conversation about cannabis (think Sanjay Gupta’s 3-part documentary “Weed” on CNN) and incited a significant business boom, referred to as the “green rush.”Currently, the cannabis industry (both medical and legally recreational) generates about $2.4 billion per year. It is predicted to grow to $36.8 billion by 2020, surpassing the predicted growth of the organic food industry.It is difficult to estimate the number of medical marijuana dispensaries currently operating in the US, or how many physicians are recommending cannabis as medicine. Based on self-reported data, the best guess in cannabis industry circles is approximately 2,400 operational dispensaries, according to the 2015 Marijuana Business Factbook.Simultaneous with the burgeoning state approvals has been a surge in clinical studies about the therapeutic benefits of cannabis. Yet the plant remains a Schedule I drug “with no currently accepted medical use” according to the US Drug Enforcement Administration.The Endocannabinoid System 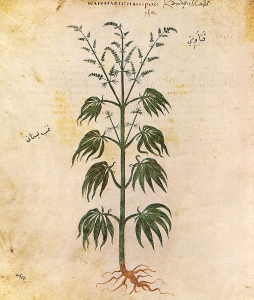 Political battles aside, clinicians across the country are working to figure out if and how cannabis fits into their therapeutic toolbox.Deborah Malka, MD, PhD, a holistic physician in Santa Cruz, CA, “offers medical marijuana evaluations to provide patients with the ability to use marijuana as a part of their medical treatment.” She believes there are “a rare few conditions where cannabis cannot help.”Conditions for which cannabis shows some degree of efficacy include: gastrointestinal issues, immune disorders, cancer, diabetes, Crohn’s disease, ADHD, cachexia, anorexia, emesis, pain, inflammation, multiple sclerosis, neurodegenerative disorders (Parkinson’s disease, Huntington’s disease, Tourette’s syndrome, Alzheimer’s disease), epilepsy, osteoporosis, cardiovascular disorders, obesity, and metabolic syndrome.Dr. Malka pointed to a number of studies to support this view, among them:Overall, the strongest evidence is for use of cannabis in chronic pain (Whiting PF, et al. JAMA. 2015: 313 (24): 2456-73). For most other conditions, the literature is conflicting, inconclusive, or very preliminary.Like most physicians, Dr. Malka—who has a PhD in molecular genetics--is cautious about remedies that claim to treat every ailment. Cannabis, however, is something of an exception. This starts to make sense if you understand its mechanisms of action.The secret lies in the human endocannabinoid system (ECS), which is made up of cannabinoid receptors, binding molecules, and enzymes.The main endocannabinoid receptors in the body are referred to as CB1 (found primarily in the central and peripheral nervous systems) and CB2 (mostly concentrated within the immune system). The latter were discovered about a decade ago.Cannabis researchers say that there may be as many as 10 distinct types of endocannabinoid receptors. The ECS is involved in a vast number of physiological processes.Much of the current research on endocannabinoids has its root in work begun in 1964 by two Israeli chemists, Raphael Mechoulam and Yehiel Gaoni. They were the first to identify tetrahydrocannabinol (THC), the primary psychoactive compound in cannabis, and the entire family of cannabinoids.A team working under Dr. Mechoulam at Hebrew University, Jerusalem, was also responsible for discovering and naming a substance called anandamide, an endogenous cannabinoid-like neurotransmitter that binds to both CB1 and CB2 receptors. In the years since Dr. Mechoulam’s initial work, more than 85 cannabinoids have been identified. The vast majority are not psychoactive, though many may have medical benefits.In 1985, the FDA approved Marinol (dronabinol), a drug containing delta-9 tetrahydrocannabinol (THC) in a sesame oil suspension. Marinol was first approved for treatment of anorexia nervosa in AIDS/HIV patients. A psychoactive component of cannabis, THC is responsible for patients feeling “high” when using Marinol. 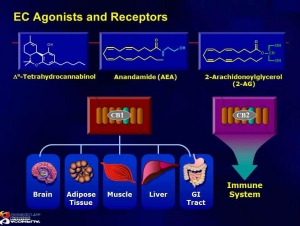 What integrative providers need to know about medicinal cannabis

Clinical Applications of CBD and other Cannabinoids and Terpenes