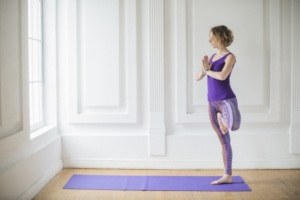 A special program that involves balance and eye movement exercises may help people with multiple sclerosis (MS) with their balance problems and fatigue, according to a study published in the January 31 online issue of Neurology, published by the American Academy of Neurology (AAN).Balance problems and fatigue are common in MS and are tied to falls and limited mobility, which can affect people's ability to work or participate in their daily tasks, says the AAN. People with MS can also have vision problems, including problems that cause them to make inappropriate movement corrections that can cause further balance issues."Most rehabilitation programs to improve balance have focused mainly on strength exercises and balance exercises that are not designed for the specific problems of people with MS," said study author Jeffrey R. Hebert, PT, PhD, of the University of Colorado School of Medicine in Aurora. "We wanted to see if performing balance and eye movement exercises while processing multiple different sensory information could help people improve their balance and fatigue issues."The study, which was was supported by National Multiple Sclerosis Society, involved 88 people with MS who were able to walk 100 meters with no more assistance than using a cane or other device on one side. The participants completed assessments of their balance, fatigue, dizziness, and other factors. Then half of the participants completed six weeks of supervised exercises twice a week plus instructions for exercising every day at home; for the next eight weeks, they had one supervised exercise session each week, plus the daily exercises at home. As a control group, the rest of the participants were told that they were on a waiting list for the program. All of the participants were tested after six weeks and again at the end of the program.The exercises included balancing on different surfaces and while walking, both with and without head movements and eyes open and closed, as well as eye movement exercises to help improve visual stability.After six weeks, the people who had completed the exercise program had improved in their balance compared to the control group. On a computer-based balance test where healthy adults with no balance issues reach a score of around 90 or better out of 100, the scores of those who completed the exercise program went from an average of 63 at the start of the program to an average of 73 at six weeks, compared to scores of 62 at the start to 66 at the end for the control group. The improvements were still evident at the end of the study.The people who did the exercises also improved on the fatigue and dizziness tests compared to the control group.Hebert said further studies are needed to determine if improvements can be sustained and to directly compare this exercise program to other balance training programs.
About the Author: