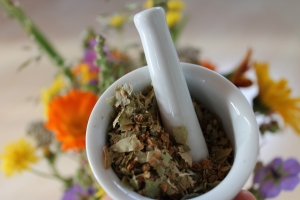 Ashwagandha, a powerful herb used in Indian Ayurvedic medicine, is known for its immune-boosting and restorative benefits. In fact, it’s commonly referred to as “Indian ginseng” and has been used since ancient times to help people strengthen their immune system after an illness.  A new study conducted on Natreon’s ashwagandha extract, Sensoril, shows that they herb could also affect joint health and relieve knee pain, according to a report published in the Journal of Ayurvedic and Integrative Medicine.The study began in India when researchers from Nizam’s Institute of Medical Sciences in Hyderabad conducted a randomized, double-blind, placebo-controlled experiment on 60 subjects with a mean age of 58 years old who suffered from knee pain. The subjects consisted of 43 males and 17 females, who were divided into three groups to take either a placebo or one of two Sensoril capsules, 125 or 250 milligrams, twice daily. The effects of the intervention were measured against baseline values at four, eight, and twelve weeks using Modified Western Ontario and McMaster Universities Osteoarthritis Index (WOMAC), Knee Swelling Index (KSI), and Visual Analogue Scale (VAS) scores.Researchers found that both doses of the ashwagandha extract produced significant reduction in knew pain symptoms, with the higher dose group showing a significantly better response. The therapeutic response appears to be dose dependent and free of any significant gastrointestinal disturbances, according to researchers.The capsule’s effects are the result of bioactives within the botanical, according to Dr. Aparna Kalidindi, Pharm D, manager of technical sales and marketing at Natreon. The main bioactives, Withanolide glycosides, have a significant effect on the hypothalamic-pituitary adrenal axis, which regulates serum cortisol concentrations. Sensoril reduces serum cortisol levels, resulting in improvements in symptoms of chornic stress. In addition, the anti-inflammatory effects have been attributed to its Withaferin A and its antioxidant activity.Ashwagandha offers a vegan alternative to many mainstream joint pain medications, which often come from animal sources. Researchers say it will be difficult to compare the two treatments side-by-side, though, due to different dosages and frequency of dosages.In addition to joint health and healthy aging positioning, the new study could open opportunities for ashwagandha use in sports nutrition and medicine. The data currently pertains to older individual already suffering from knee pain symptoms, but researchers say the treatment could work on knee pain in younger, active individuals and athletes.
About the Author: